Prof. Khwaja Ekram at AIUMB’s conclave: “Muslims never lagged behind in sacrificing their life for the country” WordForPeace Special Correspondent

New Delhi: 25 August The one-day seminar organized by All India Ulama and Mashaikh Board at Delhi’s Ghalib Academy on the theme “Participation of Mus 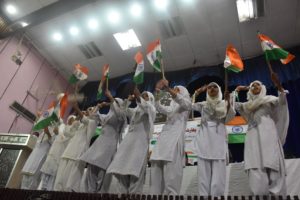 The one-day seminar organized by All India Ulama and Mashaikh Board at Delhi’s Ghalib Academy on the theme “Participation of Muslims in the creation and development of India” successfully concluded with the remarkable message from the Chief Guest, Professor Khwaja Mohammad Ikramuddin of Jawaharlal Nehru University, Delhi. He said: “Muslims never lagged behind in sacrificing their life for the country from Tipu Sultan to Birgedier Veer Abdul Hameed and ever since, Muslims have been in the front in giving life and wealth for the country”. Speaking on the core subject of Muslims’ participation in the freedom movement, he said that, whether it was the first freedom struggle of 1857 or the 1947 Independence of India from the British rule, the sacrifices of Muslims along with Hindus and Sikhs appear in the first row. 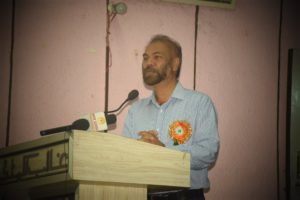 Another JNU professor, Syed Akhtar Hussain was the distinguished guest at the seminar. He dwelt on the significance of Musaddas Haali, also known as “Musaddas e-madd o-Jazr e-Islam”. It gives a historical account of the rise and fall of the Islamic empire in the sub-continent. It also speaks about the Islamic empire at its best and worst and aims to forewarn the Muslims of the sub-continent, make them more aware of their past and help them learn from their forefathers’ mistakes. 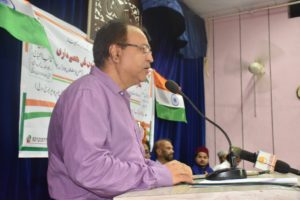 In this event, scholars, ulema and researchers from across the capital participated and presented their research papers. The program was presided by Syed Farid Ahmed Nizami of Dargah Hazrat Nizamuddin Aulia. 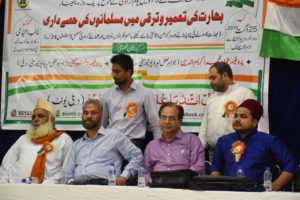 Speaking at the seminar, Professor Khwaja Khwaja Mohammed Ikramuddin said that the success of the independence struggle was possible only when the whole country unitedly fought against the British with the same fervour. He further said, at that time, a great many Muslim ulema waged both intellectual and physical jihad against the British, after which scores of people came out of their comfort zones and fought against the colonisers. “The ulema did not just give the fatwa but also jumped straight into the freedom war, from Allama Fazle Haq Khairabadi, Mufti Inayatullah Kakorvi, Maulana Ali Jauhar to Maulana Hasrat Mohani. The Muslim freedom lovers everywhere were wearing shroud in the head against the British, and that is why the British rulers killed and crucified thousands of ulama and their bodies were seen on the trees on both sides of the road. He also said that Tipu Sultan, Bahadur Shah Zafar, and many other names like them cannot be removed from the history of India’s independence. 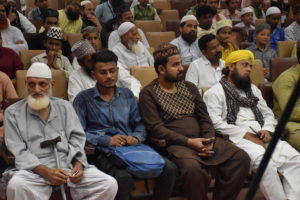 Highlighting the role of Muslim poets and philosophers in the Independence struggles, JNU Professor in the Urdu department, Syed Akhtar Hussain said that Urdu journalism’s herculean efforts are recorded in golden letters in the history of the Indian freedom movement. The honour to go to jail under the British Press Act against Indian journalists was also conferred upon a Maulana, an Urdu journalist who was named Maulana Hasrat Mohani. He was the first Indian journalist who was imprisoned under this Act, he said. 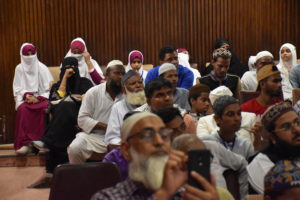 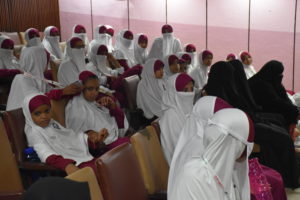 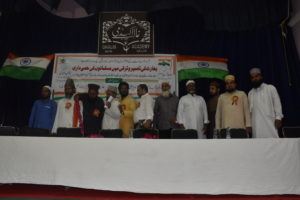 The AIUMB program coordinator Mr. Husain Sherani gave vote of thanks and at the end of the program, the Wali Ahad Sajjadanshin of Dargah Hazrat Nizamuddin Auliya prayed for the peace and prosperity of the country.

World Sufi Forum 2016: What you need to know about Muslim event inaugurated by Narendra Modi 0

Babar Ashraf removed from AIUMB; launches his own org 0