Hazrat  Syed Makhdoom Ashraf Jahangir Simnani (1287–1386 CE) was a revered Indian Sufi of Persian origin and an ardent follower of Shaikh-e-Akbar Ibnal-Arabi. He was particularly imbued with Ibn al-Arabi’s spiritual doctrine of wadhat-ul-wujud (Unity of Existence). Blessed with the 14 different chains of Sufism, he rendered remarkable services to the development of Chishti and Qadiri Sufi orders in India.

Makhdoom Ashraf Jahangir was born in Simnan of Iran in 708 (A.H). After an untiring spiritual journey of a seeker throughout the Islamic world at that time, he eventually settled in India and established his Khanqah in today’s Ambedkar Nagar of Uttar Pradesh which is known as “Aastana-e-Hazrat Makhdoom Jahangir Simanani”. His family is a descendent of Prophet Muhmmad (pbuh) through the lineage of Imam Hasan (r.a). In spirituality, he was a disciple of the 13th century eminent Chishti Sufi saint of Bengal Hazrat Alaul Haq Pandavi, the disciple of another prominent Chishti Sufi of Bengal Khwaja Akhi Siraj Aaina-e-Hind. Makhdoom Simnani formed his own Sufi order (silsila) through his spiritual disciple Hazrat Syed Shah Abdur Razzaq Nur-ul-Ain, the 11th direct descendant of the renowned Sufi Sheikh Abdul Qadir Jilani (r.a). Attributed to the name of Ashraf Jahangir Simnani (r.a), the disciples of his Silsilaare called “Ashrafi”. 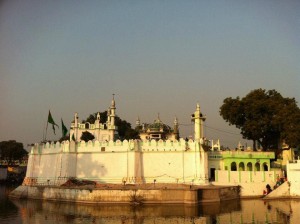 Makhdoom Simnani left behind his spiritual theories and ideas in a book titled “Lataif-e-Ashrafi” which essentially means subtleties of Ashraf explaining the anecdotes of Sufism. In fact, it is a historical document on different glorious dimensions of Sufism that was written and compiled in the 8th Century Hijri. Based on the malfoozat (the spiritual exhortations), it is an unparalleled rendition of Sufi precepts and practices, edicts and narratives. Its originality and authentication stand up to scrutiny because it was written and compiled by Makhdoom Simnani’s most senior and the closest disciple Nizam Yamani. Moreover, it was approved and authenticated by Syed Ashraf Jahangir (r.a) himself.

After I went through a large chunk of the spiritual discourses presented in Lataif-e-Ashrafi, I felt the need to share a very interesting and pertinent discourse that Makhdoom Simnani has delivered with regard to the basic Islamic tenet, Tawheed (monotheism or oneness of God). In this discourse, he sought to deepen his disciples’ understanding of the very first and foremost pillar of Islam, that is, belief in Tawheed. In fact, he has adopted and interrelated a Sufi approach to profess and practice this basic Islamic doctrine.

At the very outset, Makhdoom Simnani gives a very touching and mystically moving definition of Tawheed. Hesays it in Arabic:

It can beloosely translated as: “Monotheism means annihilation of the lover in attributes of his/her beloved”.

In this context, Makhdoom Simnani has aptly quoted Syyid al-Taifa Hazrat Junaid Baghdadi, one of the most renowned early Persian mystics of Islam and a central figure in the golden chain of many Sufi orders. His quotation on Tawheed goes on as a remarkable Sufi proverb in Arabic:

It means that “when one develops the true essence of Tawheed, all external forms of belief and ritualistic customs vanish away and the only thing that remains intact is the existence of one and only God, in the same form as it has remained for ages”.

Buttressing his perspective on ‘Tawheed’ as an inclusive, all-embracing and comprehensive Islamic term, Makhdoom Simnani has described different degrees of Tawheed in detail. He has put it into various categories, mainly (1) tawheede imani (oneness in conviction), (2) tawheed e ilmi (oneness in intellect) and (3) tawheed e hali (oneness in personal state).He beautifully dwells on each category of Tawheed in a manner imbued with spiritual connotations. I am briefly reproducing below the gist of his key reflections on the meanings of each term.

“Tawheed e Imani can be explained as an act of the servants of Allah, confirming by heart and verbally acknowledging the uniqueness and individuality of His divine virtues (Sifat-e-Bari) in accordance with the injunctions given in the Quran and Prophetic traditions. Thus, Tawheed e Imani requires deep conviction and confirmation about the holy Prophet (pbuh) and firm belief in the truthfulness of his messages”…… Hence, Sufis and all faithful Muslims should be wary of the fulfilment of this basic requirement of belief”.

“This second degree of Tawheed is attained within oneself; through inner spiritual knowledge. This is also called “ilmulyaqeen” (confirmed knowledge) which is one of the initial stages of Tasawwaf that exhorts one to believe and confirm that there is no existence other than Allah almighty and He is actually the only present and pervading entity. All other personas, virtues and actions are nothing in comparison to His persona, virtues and actions. In this degree of Tawheed, one is supposed to acknowledge the growth of each and every person as a manifestation of the divine persona of Khudawand (God) considering each virtue as reflection of the Absolute Source of all virtues”.

Having explained the above degrees of Tawheed, Makhdoom Simnani goes on to dwell on the term “Tawheed e Hali”, which he considers a state of faith standing in the third degree.This is how he illustrates what he thinks the term means:

“It implies that thehaal or state of Tawheed is the most essential virtue of the spiritual practitioners. All darkness of the existence is lost in the light of Tawheed. In this state, one should be overwhelmed by the light of Tawheed in such a way as the stars lose their light in the sun. And at the crack of dawn, its light begins to prevail and gradually overpowers the light of all the stars”.

“Having attained this higher culmination of Tawheed, the state or haal of Muwahhid (believer in one God) gets completely lost in the deepest cognition of Wahid (the One and Only), to the extent that he/she sees nothing except the beauties of His zaat (existence) and His sifat (virtues and attributes). In this process, the observer (mushahid) goes to the extent that he begins to consider his own existence as that of the Almighty and his own observation (mushahida) as an attribute of His. Thus, as he gets more and more deeply immersed in the sea of Tawheeed, his existence attains complete synergy with that of the Almighty”.

Thus, Makhdum-e-Simnan concludes that “a Muwahhid (believer) is like a drop in the roaring ocean of Tawheed”. He says:

It means that “Tawheed is an ocean and the Muwahhid is just a drop in it with no influence, appearance or power of its own”.

In this regard, Makhdum-e-Simnan has also quoted Shaikh Abu BakrShibli (861 – 946), an eminent Sufi figure and a disciple of Junaid Baghdadi. Shaikh Shibli said on Tawheed:

It means: Muwahhid is a creditor who cannot repay his debt and he is a poor who cannot fulfil his dues. Makhdum comments on this quotation: “In Tawheed e Hali (oneness in state), what happens to the practitioners is that all customs and symbols perish for him for all the practical purposes”. He gives an example of lightening and says that “just as a flash of light comes for a moment and then it ends immediately, similarly, to a Sufi practitioner, all human customs emerge momentarily and vanish after a very short while. This is the stage where he negates the heresy in its entirety”.

In this book, Makhdum Ashraf Jahangir Simnani is often mentioned as “Qudwatul Kubra” (a person looked to by others as a great example to be emulated).

Owing to the failing health of Allama Shams Barelvi, the task of comparing and authenticating the original manuscripts with the earlier translations was assigned to Dr. Khidr Naushahi, a distinguished scholar of Persian language, literature and history with a strong background in Sufi sciences (Uloom-e-Tasawwuf). The book was published under the instruction and supervision of Nadhar Ashraf Shaikh Muhammad HashimRida Ashrafi, former executive director of the Muslim Commercial Bankof Pakistan and Khalifa of Sayyad Mukhtar Ashraf known as Hazrat Sarkar-e-Kalan.