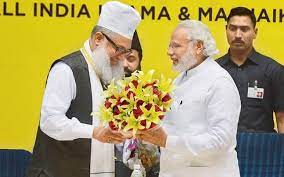 Spell out steps taken to tackle riots: Sufi outfit asks Modi govt New Delhi, March 17 2016 Saying that there is a “sense of fear” among Musl

Saying that there is a “sense of fear” among Muslims due to riots, an outfit representing Sufis on Sunday urged the government to alleviate the concerns.

It also asked the Ministry of Home Affairs to spell out the steps taken to tackle small or big communal incidents and riots that have taken place “so far” across the country.

All India Ulama and Mashaikh Board (AIUMB) president Syed Mohammad Ashraf asked Prime Minister Narendra Modi to “rectify historical blunders” and pay heed to the community’s demands, including measures to tackle the trend of replacing Sufism by extremist ideologies.

Speaking at a mass congregation marking the conclusion of the first World Sufi Forum in New Delhi, Ashraf said there has been a lack of representation for majority of the Muslim populace on “key positions” and urged the government to look into it.

At the gathering at Ram Lila Maidan, AIUMB also released a 25-point declaration, in which it urged governments across the world — including the Modi dispensation — to “revive” Sufism in their bid to combat terrorism.

“There is a sense of fear among Muslims due to riots. Government should alleviate this fear and Home Ministry should spell out what steps have been taken with regard to all the small or big communal incidents and riots that have taken place so far in different parts of the country,” the declaration reads.

The outfit denounced “every course” of sectarianism and described it as “threat to India’s solidarity”.

“We request all governments of the world, especially the Government of India, to extend full cooperation for the revival of Sufism,” it added.

Ashraf expressed concern that there have been “concerted efforts” to weaken Sufism in India and to replace it with “extremist and radical” ideologies and sought the government’s intervention in arresting the trend.

“In the past few decades, there have been concerted efforts to weaken Sufism in India and replace it with extremist and radical ideology… The phenomenon is dangerous, not just for the Muslim community but also for the country. We request the Prime Minister to rectify these historical blunders,” he said.

Asked about the alleged “atmosphere of intolerance”, Ashraf said, “We cannot determine the picture based on a few incidents. We should treat these as causes for alarm. We should try and ensure that our Ganga-Yamuna culture is not affected since there are signs that it is being weakened. Then we should try and strengthen it.”

The four-day World Sufi Forum, inaugurated by the Prime Minister and being attended by delegates from 22 countries, concluded on Sunday with the declaration of the 25-point agenda by AIUMB.

‘We support PM, but he must deliver’: Times Of India 0