All India Ulama and Mashaikh Board has heightened World Sufi forum preparations in order to organize 4-day international Sufi event. 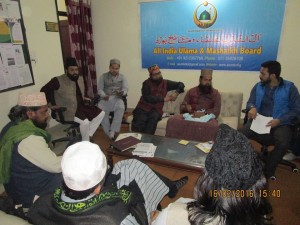 In this regard, a preparatory meeting, chaired by Maulana Syed Sibtain Haider, the National Vice President of the Board, was held at the headquarters of the All India Ulama and Mashaikh Board (AIUMB head office). The meeting was aimed to review the activities and preparations that have been made so far. It is noteworthy that Hazrat Syed Muhammad Ashraf Kichchawchchvi envisioned the inception of the WorldSufi Forum to stimulate revolutionary thinking and exchange of ideas on the promotion of peace and counter-extremism within a spiritual Islamic framework.

Maulana Syed Sibtain Haider said that we need to accelerate the work, as the days of world Sufi forum are approaching fast. However, he said, we must greatly consider complete peace, tranquility and brotherhood in all this process.

Syed Tanvir Hashmi, President Karnataka shared valuable inputs about the management of the Event. He shared his expertise about an event of this magnitude. As he has been a vital part of the AIUMB team who have successfully organised previous conferences of AIUMB. He also advised the organising team to take care of minute issues also.

Syed Hasan Jamee (National Secretary, AIUMB) said that the paper works of the seminar as well as the conference are in the final stage. He thanked and appreciated all his colleagues for the work they have done and encouraged to accomplish whatever is yet to be done. He also emphasized certain matters of concern that need to be paid greater attention at this juncture.

Maulana Syed Aalamgeer Ashraf, President AIUMB Maharashtra said that many works have been done for the successful accomplishment and influence of the World Sufi Forum on the local level.  Many new volunteers offered their services to ensure the grand success of World Sufi forum. Their details have been submitted to the local offices. The Central Office shall determine and prioritize the necessary voluntary services in different fields as suited to them.

Syed Farid Nizami (Vice-President of AIUMB Delhi Unit) commented on the situation in the capital, Delhi in this regard. He said that the capital of India including the entire nation is desperately waiting for the 20th March when the world fraternity of Sufi Mashaikh, scholars, leading ulama and imams will share an international Sufi stage comprising over 200 Ulama and Mashaikh in the Delhi’s Ram Lila Maidan.  Therefore, all the AIUMB members and volunteers in Delhi are actively engaged in preparing for the WSF event, he said.

Maulana Abdul Moid Azhari, the office secretary of the AIUMB, said that “it is our pleasure that we have been receiving prompt acceptance of our initiations that we extended to international Sufi delegates”.

He added saying: “The seminar will be attended by prolific writers, veteran journalists and well-renowned Islamic scholars and academicians who already consented to present their papers and articles on a variety to topics related to the main theme: “Sufism: Seeking to resolve the Global Crisis”. Both national and international scholars and writers have been invited to attend the seminar. He also said that the papers will be published in book form which will be brought out during the World Sufi forum.