THE MAN AND HIS MISSION 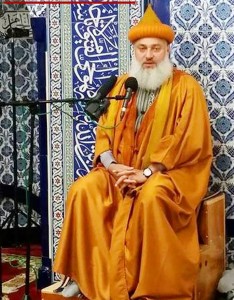 universities in Islamic studies and theology Hazrat Maulana Mohammad Ashraf Kichchawchchvi  is a well known cleric, Mashaikh, academic, educator, preacher , scholar , social thinker and intellectual . His broad vision of India, Indian Muslims, social amity, cultural development, spiritual enrichment and social empowerment has been translated into an organization All India Ulama &Mashaikh Board (AIUMB), an apex body of Sunni Sufi Muslims of India. Born in a well revered family of saints/ Godly men of Kichchawchcha Sharif, in Ambedkar Nagar of Uttar Pradesh, better known through the Aastana of Hazrat Makhdoom Ashraf Jahangir Simanani, he is a descendent of Prophet of Islam and has been following true Islam traditionally followed by the elders of the family. As the family history dates back 630 years, the followers of the Makhdoom Ashrafi family are scattered all over the globe and they are several millions in number. Hazrat Maulana Mohammad Ashraf started with the thought that in this new millennium the need of the hour is to reach Sufi Sunni Muslims in their localities, listen to their problems and strive to have them solved from the authorities. He concluded that Mashaikh should come out of the confines of their Khanqahs, Dargahs and Aastanas, and roam around to reach those who are not able to attend the spiritual centres every now and then so Hazrat Maulana Mohammad Ashraf is permanently on sojourn in every nook and corner of the country and also visiting nations abroad to propagate the universal Islamic message of peace and pacifism. He is a strong votary of accord, co existence and tolerance and hence the agenda of the board has been set as propagating all old practiced values of Sufi Culture. He is strongly for Peace and equally strongly against   extreme ideology of any hue. He practices and preaches true and traditional Islam.

Apart from pity and healing has been actively associated with educational and social movements. Creating a peace loving, coherent society is main objective that can be achieved through education, empowerment and cultural enrichment and hence AIUMB has taken up these issues as its main agenda. Establishment of quality centres of modern educations in all minority concentration areas, easy access of Indian Muslims to government welfares schemes meant for minorities, proper representation in Muslim bodies and government bodies requiring Muslim representation, inclusion of Sunni Sufi Muslims in aid and advice process while planning schemes and programs for the community and inclusion in implementation of ongoing welfare programs of the present and previous regimes has been high on the agenda of the board due to personal attachment of the founder and president Hazrat Maulana Mohammad Ashraf. With 5 big conferences, Jantar Mantar rally and thousands of meetings in all the corners of the country Hazrat Maulana Mohammad Ashraf has brought AIUMB to the fore front as a concerned group of the leaders of almost all prime Khanqahs, Dargahs and Aastanas of India and has been successful in educating masses and encouraging union and state governments to take the matter of Indian Muslims seriously.