At Sufi meet, Modi lauds Islam as a religion of peace:The Hindu 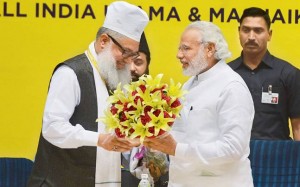 Prime Minister being welcomed by AIUMB founder-president Syed Mohammad Ashraf Kichuachwi at the inaugural ceremony of the World Sufi Forum in New Delhi on Thursday.

The Prime Minister quotes from Koran and makes a strong pitch against terrorism.

Prime Minister Narendra Modi said on Thursday that all Indian communities were an integral part of India, making a pitch for pluralism and diversity.

Mr. Modi was addressing delegates of a global Sufi meet here at a time when shrill statements from many within the BJP and the Sangh Parivar have created controversies in the past few months.

Rejecting terrorism, Mr. Modi hailed Islam as a religion of peace, citing the Koran and also paying rich tributes to the eclecticism of the Sufi tradition.

“Welcome to a people with an abiding belief in Vasudhaiva Kutumbakam, the world is one family,” Mr. Modi said. Mr. Modi said leaders like Maulana Abul Kalam Azad chose not to side with the idea of division based on religion after Independence.

“This is the spirit of India. This is the strength of our nation,” he said. “All our people, Hindus, Muslims, Sikhs, Christians, Jains, Buddhists, the micro-minority of Parsis, believers, non-believers, are an integral part of India.”

He sought to draw a parallel between these values and his own policies, saying, “The values of harmony, welfare, compassion and love for human beings are the foundation of a just society. That is the principle behind my creed of Sab Ka Saath, Sab Ka Vikas.”

The Prime Minister made a strong pitch against terrorism, underlining that “terrorism divides and destroys us”. “Indeed, when terrorism and extremism have become the most destructive force of our times, the message of Sufism has global relevance,” he said.

“Sufism is a celebration of diversity and pluralism, expressed in the words of Hazrat Nizamuddin Auliya, that every people has its own path of truth, beliefs and focus of reverence. These words reflect the divine message of the Holy Prophet that there is no compulsion in religion; and also that to every people, we have appointed ways of worship which they observe,” Mr. Modi said amid applause.

In reading Islam as a religion of peace, the Prime Minister may, however, have broken with many Hindutva outfits that, academic studies have argued, have tended to highlight Islam as an “invader” in India.

The PM also saw the basic attributes of Sufism among Indian Muslims: “It is this spirit of Sufism, the love for their country and the pride in their nation that define the Muslims in India.”

“They are shaped by the values of the Islamic heritage of India. It upholds the highest ideals of Islam and has always rejected the forces of terrorism and extremism,” he said.

Underlining that Islam is a religion of peace, Mr. Modi said: “When we think of the 99 names of Allah, none stand for force and violence, and that the first two names denote compassionate and merciful. Allah is Rahman and Raheem.”

While asserting that the fight against terror was not a fight against any religion but one between humanism and inhumanity, he hit out at terror as a threat to religion itself. “Terrorists distort a religion whose cause they profess to support. They kill and destroy more in their own land and among their own people than they do elsewhere. Those who spread terror in the name of religion are anti-religious.”

A matter of faith 0