All India Ulema and Mashaikh Board (AIUMB) and Jama’at-e-Ahl-e-Sunnat Karnataka organized, for the first time in India, the unveiling of the famous book “Khasas-e-Ali” written by Imam Nasai at India Islamic Cultural Center (published by Dr. Syed Afzal Pirzada Research Center). The book is contain on 1200 pages.

A symposium was organized in which a large number of delegates, professors, researchers, intellectuals and journalists from various Islamic countries (Turkey, Iraq, Iran and Indonesia) participated and expressed their views.

In his presidential address, Syed Muhammad Ashraf Miyan, founder and President of the AIUMB, said that despite having the largest collection of Islamic literature in Persian after Arabic, no stable mechanism has yet been developed to use Persian sources.

He further said that the literary work done by the team and board members of Syed Tanveer Hashmi is commendable. “This blessed act is in fact the Sunnah of the Prophet’s Companions, because this is how they distinguished between believers and hypocrites. They used to check who participated in the remembrance of Hazrat Ali” and who eschewed it. “Mentioning Ali frequently is in fact the prophetic tradition (Sunnah) and that of the Companions. Thus, the relationship of Ali with the holy Prophet (PBUH) is the point of unity for the Muslim Ummah”, he said.

The Ambassador of Turkey, on this occasion, said: “I congratulate Hazrat Syed Mohammad Ashraf and Hazrat Syed Tanveer Hashmi for the momentous work they are doing. ” Our presence in this historical moment in itself is a great blessing for us”, he said.

Mr. Ghazi Al-Tawfi, National General of the Republic of Iraq, said that Hazrat Ali is the main door to knowledge.

The Ambassador of the Republic of Iran, Mr. HE, Dr. Ali Cheghni said that the number of people who love Hazrat Ali and the books written on him are the highest in India. In this beautiful country, even non-Muslims love Hazrat Ali.

Mr. Mahesh Sahariya (Consul General of Indonesia) said that reading this book will help us to recognize the truth and falsehood so that we can establish justice in our countries. 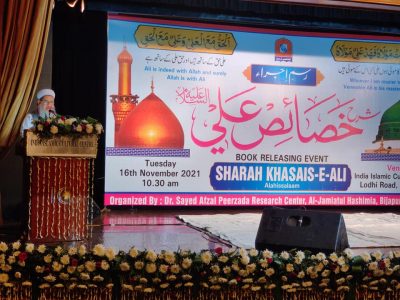 Hazrat Syed Tanveer Hashmi said that in every age, the groups of Kharijites and the Nasibis have not only desecrated the holiness of the Ahlul Bayt (Prophet’s household) and the Prophetic tradition but also caused Islam and Muslims severe hardships, and even today they are causing humiliation and harm to us.  Therefore, there was a need for some effective measures to be taken as a remedy. For this, the All India Ulama and Mashaikh Board and the Jamaat-e-Ahl-e-Sunnat Karnataka decided to publish “Khasais-e-Ali” as the antidote to this poison. It is necessary to carry forward the knowledge of Ali along with the Prophetic traditions. Maulana Hashmi further said that Maulana Qari Zahoor Ahmad Faizi is a great researcher and historian who has rendered a great service through his Commentary on the Khasais-e-Ali.

Haji Syed Salman Chishti said that this achievement of Dr. Syed Afzal Pirzada Research Center is a great gift for the global Muslims which has to be maintained and acted upon. Syed Aal e Mustafa alias Ali Pasha Qadri said that Hazrat Imam Nisai and his place in the science of Hadith is very high. And he was also a great lover of the Prophet, he gave his life for the protection of the honorable Ahl-e-Bayt.  “This book was never digested by the Umayyads, and when the author Imam Nisa’i recited this book to them, they not only disliked him but rather Imam Nisai was severely beaten and martyred”, he concluded. 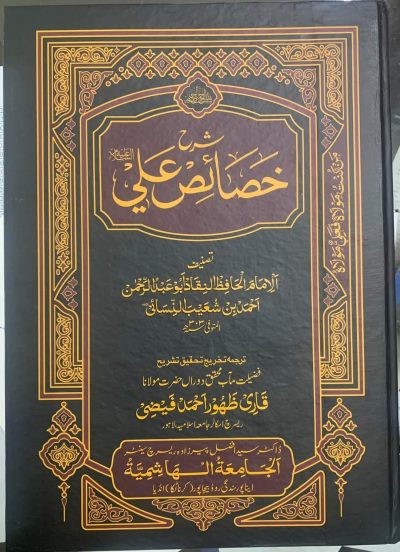 Prof. Akhtarul  Wasey said that it was not easy for Hazrat Imam Nisa’i to write “Khasas-e-Ali”, and that the compilation of this Commentary was long overdue. “It should have happened long ago, but now it is our responsibility to introduce this book in the curriculum of Madrasas and Universities so that the students can understand the life and teachings of Hazrat Ali”, Prof. Wasey said. 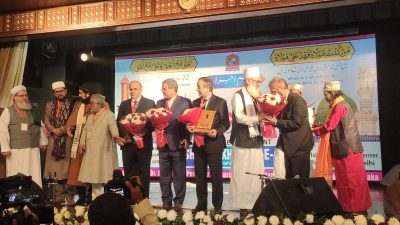 Prof. Khawaja Muhammad Ikramuddin (JNU) said that translations and commentaries not only play a vital role in nurturing knowledge and art but also have a great role to play in communication and transmission as well as in the call for faith (Dawat) and preaching. Had it not been for remarkable commentaries, we would not have been able to understand Islam so easily. He concluded that it is highly important that such research work and commentaries continue to be published.

Maulana Maqbool Ahmad Salik Misbahi, AIUMB spokesperson said that whenever the honor and dignity of Ahl-e-Bait was attacked, Allah Almighty raised up one or the other sincere lover who fought against the enemies of Ahl-e-Bait. Dr. Wahid Nazeer of Jamia Millia Islamia said that the background story of Khasais-e-Ali and its compilation and composition is very painful. Just as Imam Hussain A.S was martyred and killed in the battlefield of Karbala, his lovers, in every age, have been attacked and injured through bad mouths and insults. He paid tribute to Imam Ali through his Urdu poetry.

The program was started by Qari Samiullah Qadri with recitation of a few Qur’anic verses.  Hafiz Syed Mohammad Areez Hashmi recited beautiful couplets of Naat-e-Rasool. On this occasion, All India Ulama and Mashaikh Board, along with Jamaat-e-Ahl-e-Sunnat Karnataka hosted a reception for all the ambassadors, delegates, Ulema and Mashaikhs and professors of universities, journalists and intellectuals who attended the conference.

The moderator of the program, Hazrat Maulana Dr Muhammad Ali Qazi, General Secretary of Jamaat-e-Ahl-e-Sunnat Karnataka, and Maulana Azeem Ashraf of the Ulama and Mashaikh Board Office in Delhi, presented a copy of the book Sharh-e-Khasais-e-Ali to all the guests.

At the end, prayers were offered for peace and prosperity in the country.