Press Release: In the backdrop of a strong consensus of All India Ulama and Mashaikh Board endorsed by great many Sufi masters, scholars and ulama ov

In the backdrop of a strong consensus of All India Ulama and Mashaikh Board endorsed by great many Sufi masters, scholars and ulama over a decision to organize an international Sufi conference titled “World Sufi Forum”, AIUMB has embarked on this mission with great gusto. Notably, the Board’s president and fo 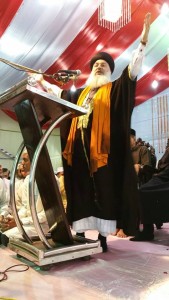 under, Syed Mohammad Ashraf Kichchawchchvi has attained renewed energy in an untiring dissemination of his universal message of peace and pluralism that he plans to deliver to the wider Muslim world through the World Sufi Forum.

In this context, the founder and president of All India Ulama & Mashaikh Board Syed Mohammad Ashraf Kichchawchchvi recently visited a neighboring Muslim country Bangladesh, where Islam has 1.7 billion adherents according to the latest study in 2015. He went on meeting both the Muslim masses and religious leaders alike with his well-planned program to work out the Sufi ideology of peace and counter-terrorism. He is quoted to have said that his visit to Bangladesh was aimed at apprising the Bangladeshi Muslims of the pressing need to integrate for this cause supporting the Sufi leaders’ initiative with all means possible.

Most prominently, Syed Mohammad Ashraf Kichchawchchvi met the Bangladesh-based members of the AIUMB International wing which is locally known as “Anjuman e Ashrafia” with a huge following in the country. On this occasion, he addressed meetings in the capital Dhaka and some other places and asked the Islamic clerics, intellectuals and Sufi sheikhs of Bangladesh to take part in the International Sufi Conference which is to be held in Delhi in March 2016. The public meetings and small-scale gatherings proved fruitful and fetched lot of support for the international Sufi conference. Countless people pledged to attend the event. Numerous Islamic scholars came forward with their proposals to read research papers in its seminar. Even one of the renowned Qaris (Qur’an reciters) wished to render his service to recite Quran, which is a prime part of the function. 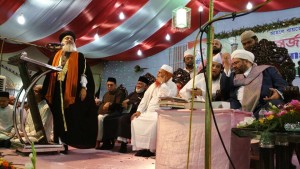 It is worth mentioning that Bangladesh enjoys good following of the Sufi Mashaikh as a result of the herculean efforts made by ancestors of Syed Mohammad Ashraf, the AIUMB president. According to their preserved history, they did great deal of service there in an effort to create a huge base of Sufi followers and disciples who are now united under the banner of Anjuman Ashrafia  extending their vital support to the Sufi cause. 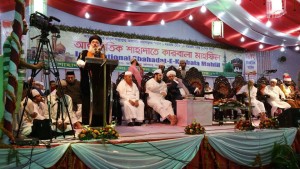 In this context, it would be interesting to trace back the history of Sufi culture and tradition in Bangladesh. Islam was first introduced to Bangladesh during the caliphate of the Prophet Muhammad’s first four companions, known as Khulafa-e-Rashidin (the rightly guided caliphs). Modern researchers have found out that inhabitants of this land were well-acquainted with Islam much earlier than the Muslim conquest of Bengal. Arab merchants would visit Chittagong port even in the pre-Islamic period. But it was a small group of Prophet’s companions who came to Chittagong in 618 during the lifetime of the Prophet (pbuh). They preached Islam in various parts of Bangladesh for years and then went to China. Thereafter, several delegations of the early Arab Muslims arrived in this land to preach the faith, tradition and culture of Islam.  The most notable among them were the Sufi saints, who came to be known as Pirs and Fakirs in Bangladesh. They contributed the most pivotal part in preaching Muslim culture in the country. For instance, the famous Sufi saint of Bangladesh, Shah Jalal of Yemeni origin, who was a descendant of the Prophet’s family and belonged to a family of saints, had a large share in it.

The Sufi saints, followed by a group of Prophet’s companions, preached moderate, progressive, multi-cultural and pluralistic Islamic tradition, which was the main reason behind its successful spread in this land of ancient Vedic culture. These Muslim mystics (pirs and faqirs) reached out to every section of Bangladeshi society and preached the universal values of infinite love, mutual respect, religious harmony and social affinity in place of retrogressive and ritualistic views in the name of religion. Thus, their egalitarian messages stressing the ideals of peace, pluralism, human equality, universal brotherhood and social justice attracted the countless natives of Bangladesh towards their Islamic faith tradition. 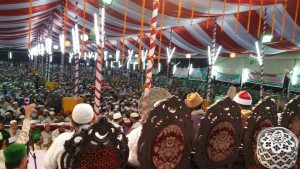 In contemporary Bangladesh, the impact of Sufism can be seen through the prism of arts and culture. The multi-faceted Sufi tradition reflects an essentially peaceful and pluralistic culture that connects contemporary Bangladeshi Muslims to their old-age Indo-Islamic heritage. The most redeeming features of Sufism’s appeal in Bangladesh continue to be its inbuilt qualities of openness, wide embrace and social accommodation. Therefore, it can be fairly considered a completely peaceful, non-confrontist, inclusive and subversive trend in Bangladesh.

However, many opine that the spirit of Sufi culture and tradition in the country is now beginning to wean off. It has been reduced to only occasional Shrine visitation, spiritual consultation or observance of Sufi-oriented rituals and festivals. Today’s fakirs and pirs in Bangladesh also seem to have done away with their effort to keep alive the mystical Sufi culture of pluralism and moderation. Though they still engage in their occupations in the mazars (shrines of the saints), that outnumber the mosques and madrasas in some areas, they have almost lost an impacting ideology that continued to preach peace and moderation for centuries. Now their business is merely providing spiritual consultation to the shrine visitors and devotees, who look up to them as their peer-o-murshid (spiritual guru) and seek consultation in relation to the issues in their life and career. As Sufi masters, pirs and fakirs are no longer the influential ideologues in the country, radical thought is taking roots in some parts. The orthodox clergy began to play their part in reshaping the common religious mindset of Muslim community, adversely impacting the harmonious culture in the country.

Nevertheless, the peace-loving and spiritually inclined moderate Muslims of Bangladesh are waking up to this reality and are eager to reclaim the lost legacy of harmonious Sufi tradition in the country. In this situation, what the apex body of Indian Sufi Sunni Muslims, the AIUMB is trying to do in Bangladesh assumes great significance.

Narendra Modi at World Sufi forum: Terror fight not against any religion:Indian Express 0