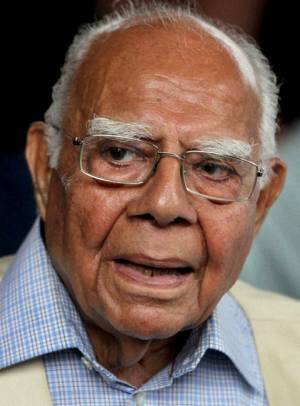 Senior lawyer and former Union minister Ram Jethmalani’s charge that Wahabi sect was responsible for terrorism provoked a walkout by Saudi Arabia’s Ambassador to India Faisal-al-Trad from an international conference of jurists on global terror here.
Jethmalani alleged that “Wahabi terrorism” indoctrinated “rubbish” in the minds of young people to carry out terrorist attacks. The senior lawyer lamented that India had friendly relations with a country that supported Wahabi terrorism.
Following Jethmalani’s speech, Saudi Arabia’s Ambassador Faisal-al-Trad was seen walking out of the conference, apparently taking offence at the remarks.
Organiser of the event Adesh Aggarwala said the Ambassador had walked out but returned after Law Minister M Veerappa Moily’s statement that the views expressed by Jethmalani were not that of the government.
Moily, in his address, said that terrorism cannot be attributed to any particular religion. It was unfortunate that the entire Islam as a religion was being blamed for terrorism, Jethmalani said, adding that “there are also Hindu terrorists and Buddhist terrorists.”
Terming Non-Aligned Movement and Panchsheel as evil, the former Union Minister said
India should align with forces of good to combat the forces of evil. “India and its foreign
ministers must learn to reassess the doctrines of past.”
He said India’s foreign policy establishment should be courageous to shun country’s relationships with its “enemies”. Referring to Jethmalani’s comments, Justice Awn S Al-Khasawneh, a judge of the
International Court of Justice, asked him not “to make sweeping statements.”

AIUMB strongly condemned the acts of terror in Sri Lanka 0