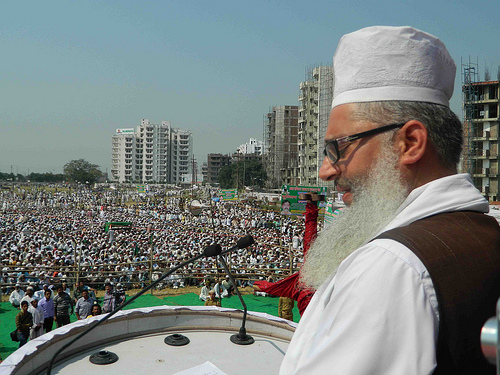 Last week's Sufi assertion in Moradabad has set the stage for a debate on extremism. October 21, 2011 Maulana Syed Mohammad Ashraf Kachochavi is the

Last week’s Sufi assertion in Moradabad has set the stage for a debate on extremism.

October 21, 2011
Maulana Syed Mohammad Ashraf Kachochavi is the General Secretary of the All-India Ulama & Mashaikh Board (AIUMB), a Sufi sect that came from nowhere to take Moradabad — and the Muslim world — by storm last week. Soft-spoken and gentle, with long robes and a flowing beard, he fits the part of the Sufi cleric to perfection.

Yet on stage at the Sufi Maha Panchyat, he roared like a lion, hurling charges against institutions that Muslim intellectuals hold in awe. At the centre of his accusations was the venerated Islamic seminary of Deoband which he held guilty of spreading hard-line Wahabism: “Hamey Wahabiyon ka na Immamat kabool hai, na kayadat Kabul (We reject the religious and political leadership of Wahabis”). Maulana Kachochavi went on to ask the gathering to rebuff overtures from Wahabi preachers, saying, “If anyone knocks on your door with the message of extremism, hand him over to the nearest police station.”

The cleric had done the unthinkable and unsurprisingly there was a rush of reactions. Retaliation came swift and strong from the adherents of the Deoband school. The Mohtamim (vice-chancellor) of Darul Uloom Deoband summoned a hurried press conference where he countered the charge and questioned the credentials of the AIUMB. And yet, alongside the loud protests — and blogs that sprang up overnight denouncing the Sufis and calling them non-Muslim — there were also gentler voices urging Muslims dispassionately to examine the message from Moradabad. Interestingly, the Sufi strains were picked up in neighbouring Pakistan with some energetic tweeting of the Moradabad Panchayat news by liberals who saw the Indian challenge to extremism from their own perspective — a perspective of fighting a long and losing battle against intolerance and bigotry.

The AIUMB, which claims to represent, among others, the Sufi Khanquahs of Ajmer Shareef, Dargah Hazrat Nizamuddin Auliya and Barelilly Shareef, made three broad points at the Maha Panchayat. First, Indian Islam’s roots are in peaceful, inclusive Sufi traditions which have historically been followed by the largest numbers (80 per cent according to the AIUMB) in the community. Second, over the years, the Sufis have lost their voice and prominence to hard-line Deobandis who have taken control of key institutions like the Wakq Board and the Madrasas, besides acquiring enormous political clout. Third, influenced by Saudi petro-dollars, the Deoband ideology has slowly morphed into a form of extremist Wahabism which has taken sections of the young into its vice-like fold. The AIUMB did not directly link the spread of Wahabism to terrorism but said terrorism drew sustenance from ideologies like Wahabism and Salafism, etc. At his press briefing, Darul Uloom rector Maulana Qasim Nomani, was unsparing of both the AIUMB and the English press that covered the meet. He said no one claiming to be Sufi could use the defamatory language that the AIUMB had used against fellow Muslims. “Why did the English media front-page this news?” he asked.

Later, Maulana Nomani told The Hindu that the Sufis were malcontents out to spread disaffection among Muslims. There was no Saudi influence as Deoband’s funds were fully audited and the institution did not accepts grants from any government, domestic or abroad. The Maulana also rebutted the extremism charge, saying Deoband had held a huge anti-terrorism rally on the campus two years ago.

The Urdu press, which all but boycotted the Maha Panachyat and blanked out the speeches made there, however, gave full play to the reactions of Maulana Nomani. There were also individual statements of outrage. Masoom Moradabadi of Jadeed Khabar saw a foreign hand behind the Sufi sect. He also accused the Sufis of presiding over huge sums of money collected at the dargahs for which there were no accounts.

Social activist Tanweer Alam argued that the Sufi sect was welcome to seek political power but it had no business to tarnish Deoband which had played a stellar role in India’s freedom struggle. Mr. Alam was furious that the AIUMB saw no difference between Deobandi and Wahabi ideologies which were themselves in conflict in some areas.”

Islamic scholar Sultan Shahin however fully backed the Sufi conclave saying it marked a milestone in Muslim politics: “It is for the first time that mainstream Ulema have come out so strongly against Wahabism which is slowly but determinedly spreading in this country.” Mr. Shahin cited the example of Pakistan where extremism not only took liberal lives but toasted and celebrated the killers. “Islam on the subcontinent has always had a syncretic, local flavour. Islam spread in India through the Sufi saints. But all that changed with the infusion of Saudi petro dollars. For me the most worrying example is Pakistan. Everything that happened there a decade ago is happening here today.”

Mr. Shahin admitted that the space for extremism had been created by the Indian State which far from showing sensitivity towards Muslims, prematurely accused them of terrorism whenever there was a bomb blast:” When from the very first minute you talk of Muslim suspects when there have also been instances of Hindutva terrorism, that would distress any Muslim.” Mr. Shahin, was however emphatic that the answer to injustice was not extremism: “You cannot deny that injustice has been done. But if you turn to extremism, you destroy yourself.”

Faizur Rahman, Secretary-General of the Forum for the Promotion of Moderate Thought Among Muslims, attributed the “unnecessary” Sufi controversy to “the lack of tolerance among Muslim organisations for dissent.” He said it was within the Sufi group’s Islamic and democratic rights to “censure the so-called Wahabi school of thought” adding that there was enough evidence in Wahabi writings and homilies to justify the AIUMB’s charges. “There are books of fatwas written by Saudi clerics which contain such abhorrent ruling as those that declare a Muslim who does not pray five times to be a ‘kafir’ and say that he must be killed and ‘buried outside the graveyards of the Muslims’ if he does not repent.”

But Mr. Rahman was unhappy with the sweeping nature of accusations flowing from Moradabad. He found the charge that Wahabi hardliners turned up at homes to propagate extremism particularly over-the-top. “There is no evidence for this.”

There is no doubt that the Sufis set the cat among the pigeons last week; they have pitted ideologues against ideologues. But whatever the Sufi group’s larger interests, they have done a service by setting the stage for a debate on extremism.

First-ever World Sufi Forum to be held in Delhi, to explore ways to counter spread of terrorism in name of faith:First Post 0