World Sufi Forum will encourage the Indian Muslims to create an environment of peace and pluralism in India: Syed Mohammad Ashraf Kichhouchhwi

The essential and inherent message of Islam is peace and security and it is guaranteed, not only for the Muslims but also for all other adherents of faith traditions, including even those who follow none. Allah sent the Prophet Muhammad (peace be upon him) as “mercy” for all worlds. Therefore, it cannot be denied that there is zero tolerance for terrorism in Islam.

These opinions were expressed by Maulana Syed Mohammad Ashraf Kichhouchhwi, president and founder of All India Ulama & Mashaikh board (AIUMB). He was addressing Muslim Scholars Sufi leaders and the Islamic clerics in an AIUMB Meeting held by the Markazi Julus-e-Chishtia, in Nagpur.

It’s an unfortunate phase of the time in the today’s history that the terrorists are playing havoc across the world in the name of Islam, he said. “Whether it is in Syria, Iraq, Sudan, Saudi Arabia, Afghanistan, Pakistan, Bangladesh elsewhere in the Muslim world, the extremist jihadists have certainly caused major distractions and irreparable loss of human life and dignity”. “Heinous crimes and completely ungodly acts are being perpetrated in the name of God, which go completely against the true spirit and basic tenets of Islam. One such core ethic of Islam is that taking the life of a single innocent is a crime against all humanity (Quran 5:32)”, Maulana Syed Mohammad Ashraf Kichhouchhwi said.

Addressing this important meeting organized by the Markazi Julus-e-Chishtia, Nagpur, the founder and president of the AIUMB,  further Syed Mohammad Ashraf Kichhouchhwi said that this meeting was held in preparation for the World Sufi Forum on 17-20 March, which will include an international seminar and a grand-level public conference in Ram Lila Maidan onMarch 20.

Syed Mohammad Ashraf Kichhouchhwi further intimated that “This International Sufi Conference and the World Sufi Forum will bring together Indian Sufi scholars, imams, Ulama, Mashaikh and intellectuals with nearly 40 Islamic scholars, Ulama and Sufi Mashaikh  representing Bangladesh, Sri Lanka, Singapore, Malaysia, China, Turkey, Canada, Syria, Arabia, Africa, Australia, the United States of America, and the UK”. “Sufi Scholars from the prominent Islamic University, Al-Azhar Shareef, Oxford, Harvard, California and professors from the University of Cambridge and Canada will also be present. Thus, a mixed gathering of Ulama and scholars from the around the world will get tighter in an effort to discuss different aspects of the current situation and build a strong framework for the solutions”. 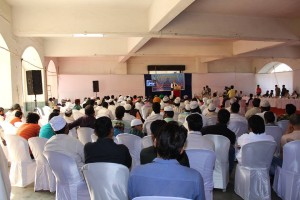 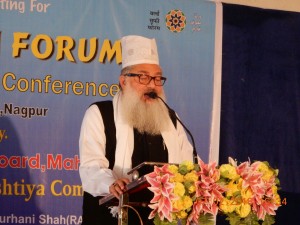 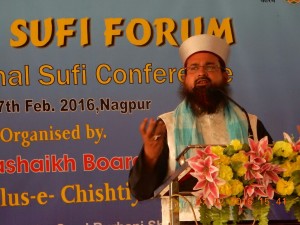 Maulana Syed Alamgir Ashraf (provincial president of Maharashtra AIUMB) said that All India Ulama and Mashaikh board is against terrorism of all forms. He added saying that “the Board aspires to foster the universal Islamic values by spreading peace, brotherhood and unconditional love. Sufi Ulama at the board, he said, are striving to guide the life of Indian Muslims in the democratic structure of the country.

Speaking at the meeting, Haji Salim Ashrafi, Chairman the Markazi Julus-e-Chishtia Chhattisgarh appreciated the dedicated efforts and activism of the Board in preaching the values of peace and pluralism and eradicating the vices of violence and social distress. He said that there is no place for intolerance in Sufism. 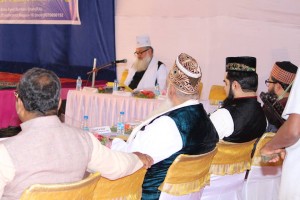 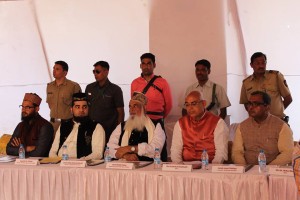 At the very outset of the event, there was a beautiful traditional recitation of the Holy Quran and it ended with the Salat-o-Salam (recitation of peace and blessings on the Prophet PBUH). Among those who attended this meet were: