On the fine evening of 27th August 2015 Prime Minster Narendra Modi acknowledged and declared that Sufi ideology is an integral part of Indian Spiritual Ethos. Honourable PM Modi expressed these humble sentiments in a first ever meeting of Prime Minister of India with a strong 40 member Sufi Scholars, Leaders and Sufi Intellectuals who had called upon the PMO from various parts of India under the respected leadership of Hazrat Maulana Syed Mohammad Ashraf Kichchawchvi – President and Founder of All India Ulama and Mashaikh Board [AIUMB] – an apex body of Indian Sunni Sufi Muslims.
Narendra Modi @narendramodi Aug 27
Sufism is an integral part of India’s ethos & has greatly contributed to creation of a pluralistic, multi-cultural society in India.

Honourable Prime Minister said that the Sufi Ideology propounded by Sufi Saints is an integral part of Indian spiritual ethos and has greatly contributed to the creation of a pluralistic, syncretic and multi-cultural society in India.
According to the official statements, Honourable PM also assured the Sufi delegation that issues of Waqf property raised by the members would be looked into.
PM also insisted on actively promoting Sufi culture, Sufi literature and Sufi music across Indian States.
Narendra Modi @narendramodi Aug 27
The delegation gave valuable inputs on promoting Sufi culture across India, including promoting Sufi music & literature.
Prime Minister said that forces of extremism are attempting to weaken the Sufi ideology today and it is essential for Sufi leaders and scholars to counter these forces through various platforms including the social media, so that the ideology of extremism does not take root in India.
The Prime Minister said that, “The tradition of Sufism has kept evil at bay, wherever Sufism has continued to flourish in the world”.
He also told the delegation that India Muslims should take advantage of Skill Development and other schemes initiated by the Central Government to make the Muslim youths to be self reliance and for that the Government has launched a Certificate program by which the youth having work experience but no formal education, will be awarded Certificate by the Government to enable them to apply for certified employment with better future perspective and also better income. Further, PM Modi asked AIUMB Sufi delegation members to identify ‘School dropout’ and encourage them to get back to studies or at least develop working skills and avail opportunities from the success of ‘Make in India’ campaign and schemes to meet the global demand for skilled work force.
Narendra Modi @narendramodi Aug 27
I talked about how Muslim community must take maximum advantage of skill development initiatives of the Govt. This will benefit Muslim youth

The Prime Minister, in his address declared that the Sufi scholars, Saints and their thoughts are integral part of Indian composite and syncretic culture. He also told that India is a plural and multicultural religiously spiritual society where everyone has right to preach and profess his/her religious faith and belief.
The delegation discussed various aspects of propagating communal harmony, peace and understandings in our country and promoting Sufi culture and Spiritual Ethos for World Peace.
The delegation has presented a Sufi Memorandum to the Prime Minister with 15 points for creating an environment of Understandings and Harmony through practical practices of Peace.
Earlier, during the course of their interaction with the Prime Minister, members of the delegation stated that Islam does not preach hatred or extremism.
The Sufi delegation members expressing their deep concern about the extremist and negative nationalistic ideologies said that there are certain forces which do not wish the Muslim community of India to keep good relations with the Prime Minister, they said that so far, the divisive politics of vote-banks has resulted in the Muslim community interacting with the government only through intermediaries; but now they want the Prime Minister to establish direct contact with the people of India, including the Muslims.
The Sufi delegation urged the Prime Minister to work towards development of people of India which is irrespective of caste, community or religion.
The Sufi delegation members said that the spread of terrorism in the name of Islam represents a danger to peace all over the world, and there is urgent need to take action to marginalize the forces which are promoting “Jihad” for social, economic or political considerations.
Narendra Modi @narendramodi Aug 27
The delegation rightly pointed out that Islam doesn’t preach hatred or extremism. Need of the hour is to marginalise forces promoting Jihad. 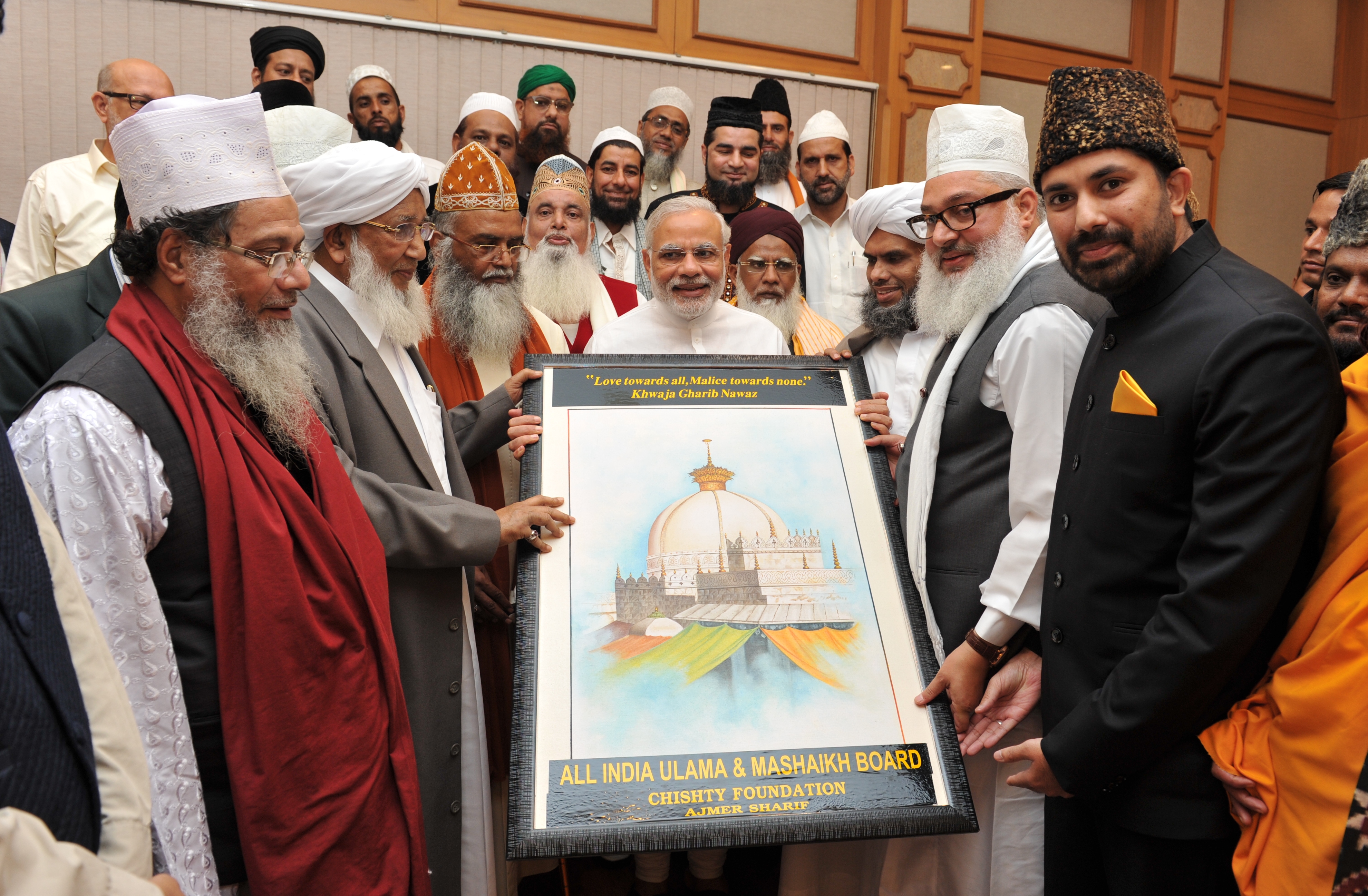 They added that there is need to spread awareness among the Muslim community that organizations such as the ISIS and Al Qaeda do not represent or even associated in any way with Islam nor with Islamic faith preachings and practices.
The delegation members also gave several suggestions for the promotion of Sufi thought and Sufi culture in India. They suggested the creation of a “Sufi circuit” to promote spiritual travels and tourism across India as well as steps for the rejuvenation of Sufi Shrines and Sufi Sites in India.
The delegation also proposed to PM Modi – a International Sufi Peace Corridor by connecting Indian Sufi cities with Global Sufi cities like Ajmer Sharif – the blessed city which host the world famous Dargah of 11th Century Sufi Saint Hz.Khawaja Moinudeen Hasan Chishty in India which is also the Sufi spiritual capital as well as blessed seat of Chishty Sufi Order in South Asia with Konya in Turkey, the city of 13th Century Sufi master Mevelana Rumi as Sufi Twin Cities. Also, cities like Philadelphia in USA which have the one and only Sufi Dargah in America of Tamil Sufi Master Hz.Bawa Muhaiudeen can be among many such Global Sufi connects where India can truly be one of the leading Sufi and Spiritual destinations of the World.

1. Indian Muslims are afraid due to communal riots. Government should do something to allay the fears and the interior Ministry must come out with the details of the actions taken to prevent communal violence.
2. Sufi centers should be established near every prime Khanqah, in state capitals and also in National capital New Delhi with a library hosting reliable collection of books on Sufism.
3. Introducing Ziyarat visa system for Sufi Sunni Muslims coming from abroad to pay respects to at Aastanas, Dargahs and Khanqahs of great saints / Sufis all over the country. Roads, railways system should be improved to connect all the Sufi centers. To attract visitors a concessional Railway ticket regime is introduced and it is also ensured that 24*7 water and electricity supply is given to these spiritual centers and also steps are taken to create a Sufi circuit to connect all the prime centers of Muslim saints.
4. Centers relating to people’s welfare schemes are established near Aastanas, Dargahs and Khanqahs so that members of all communities may be able to avail the opportunity.
5. Quality centers of modern education are established in Muslim dominated areas with Urdu as a subject and vocational training institutes are also opened there for skill enhancement. All such schools should follow a curriculum that promotes peace with recognized subjects.
6. Central Madrasa Board bill be presented in parliament to convert it into a law, with all the amendments suggested by AIUMB.
7. The management of Central Waqf Council, State Waqf Boards, Central and state Hajj committees, Maulana Azad Education Foundation, Minority Finance and Development corporation, National and State Human rights commission ,Minority commission and other such organizations may be entrusted to followers of Sufi order so that Indian Muslims can be brought into full inclusive and participatory main stream. Extremists should be kept away from management of Sunni affairs.
8. The management of ASI protected mosques and Dargahs and other Muslim monuments be entrusted to Sunni Sufi Muslims so that they are managed according to the will of the endower.
9. A separate Dargah management board is created in the ministry of minority affairs. These boards should be independent entity with nothing to do with Waqf boards. The management of this board may be given to the heads of prime Aastanas, Dargahs and Khanqahs
10. All the Muslim Waqf estates in India are historically Sunni Sufi assets. But they are occupied by extreme forces. Let it be mentioned that this extreme ideology came to India in 1855. Before this Indian Muslims were known as two ideologies (Sufi Sunni & Shia) Waqf properties have been endowed either by Sufi Sunni Muslims or Shia. That is why two different boards were created to look after the Waqf properties. One was Sunni Waqf board and another was Shia Waqf board. Shia Waqf board is still being run by Shia Muslims but after 1919 the followers of an extreme ideology started grabbing Sunni Waqf properties and by now from peon to chairman, every one attached with the management of Sunni Sufi Waqf assets, is the follower of the same ideology. Before 1919 Sunni Waqf board and all the properties, mosques, Madarsas and Khanqahs were manned and managed by only Sunni Sufi Muslims. Hence AIUMB demands that all the properties endowed after 1919 by the followers of an extreme ideology be separated from historically Sunni Sufi Waqf properties and another board is created for them while Sunni Waqf boards are brought in the management of Sunni Sufi Muslims.
11. Mosque grabbing spree with active connivance of the waqf boards is stopped immediately because this exercise of Extremist sect not only violates the will of the endower but also creates a danger for law and order in the country.
12. A monitoring committee be established in HRD ministry or ministry of information and broad casting or Indian ministry of minority affairs to monitor the content on print and electronic media that tend to increase extremism.
13. A joint suggestions and action committee be constituted to understand the basics of problems of Indian Muslims. This committee should comprise government representatives along with representatives of Sunni Sufi Muslims of India.
14. Bank loans, financial support and other facilities granted by the government are made easy to access by the Muslim unemployed youth also.
15. A quota be fixed for the Muslims according to their share in the population so that Muslims get their due from the schemes floated for the welfare of minority communities.

We stand by the Muslim personal laws, not the self-imposed Muslim Personal Law Board (AIMPLB): Syed Mohammad Ashraf 0