Ideology of hate on the rampage: The Hindu

By: GHULAM RASOOL DEHLVI January 25, 2016 The neo-kharjism driving attacks in Bacha Khan University and elsewhere is antithetical to Islam’s main 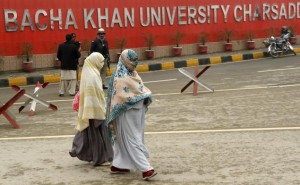 But the moderate, pluralistic and forward-looking elements of any society, Muslim and non-Muslim alike, cannot remain silent onlookers at the religious extremists who murder and maim non-combatant civilians including women, children and innocent students.

Against the backdrop of this brutality, it is high time we take cognisance of the extremist ideology that the Taliban and its entire jihadist ilk adhere to.

Throughout the Islamic history, the Kharjism-inspired doctrines provided the religious and ideological underpinnings to enable radical Islamist movements to take up arms against the non-combatant civilians. While most non-Muslim governments are able to reconcile with the mainstream moderate Muslims, Kharijite extremists reject any kind of reconciliation, and are hell-bent on exclusion of all other religious communities and faith traditions.

Regrettably, there has been a violent tide of religious fanaticism across the Muslim world, which often comes out to play havoc across the globe. It is directly inspired by the Khariji ideology, which is completely antithetical to the mainstream spiritual narrative of Islam.

The Khariji ideology is built on the concept of political enforcement of religious beliefs and thus allows aggression and violence in matters of faith. Much against this idea, the traditional Islam considers faith as a personal relationship between man and God. Therefore, in this spiritual belief, there can be no compulsion or force used in religion.

From the time of the Prophet Muhammad (saw), peace and tolerance were practiced between different religious groups, with respect to distinctions in belief.

However, many of us are turning a blind eye to a vicious stimulus of the xenophobia against all other religions and nations. This is the major cause of the atrocities of ISIS or other extremist followers of Islam today which rely on brazenly un-Islamic doctrines.

Nearly all world religious leaders and governments have shown vital support to the innocent Pakistani civilians in this troubling time. But the question still remains to be answered: will they again restrict themselves to their verbal outrage against the Tehrik-e-Taliban Pakistan as usual? Is merely condemning the culprits sufficient enough?

Never, every condemnation, however vehement or spirited, will remain futile, unless they crush down the ideologies of terror. It is an opportune time for them to uproot the extremist roots that the Taliban and its entire jihadist ilk have.

Surprisingly enough, a large part of the world is still purportedly oblivious to the ideological factor, while a considerable number of the Islamic scholars, spiritual masters and heads of global Islamic seminaries have identified the nexus between extremism and the misreading of Qur’an and Hadith (the primary Islamic scriptures).

Notably, an apex body of Sufi Sunni Muslims in India, All India Ulama and Mashaikh Board (AIUMB) has mustered the courage to raise this prime concern. While denouncing the recent brutal attacks in Pakistan, AIUMB founder-president, Syed Muhammad Ashraf Kichuachwi said, “The attacks in Pakistan should serve as a wake-up call for the entire international Muslim community to rethink their strategy to defeat the vindictive Talibani thoughts, which remain a threat to all the liberal fraternity”.

Syed Muhammad Ashraf averred that the recently perpetrated killing of Pakistan university students was a direct result of Talibani radicalisation catching the imagination of the gullible and naive Muslim youth in the country.

Clearly, the extremist ideology is now spinning out of control. A violent mindset motivated by a dangerous ideology of intolerance and wanton killing is exponentially growing.

At a time when the subject of radical Islamism or Kharijism has been wholly unnoticed or undermined, the Sufi clerical circles have challenged it, that too boldly and objectively. A considerable number of Islamic clerics, Ulama and Imams, particularly those with Sufi orientation, have come out to rebut the terrorist ideology immersed in misinterpretation of Islamic history and theology.

The topmost Islamic university today, Al-Azhar’s chancellor Shaikh Ahmad Al-Tayyab’s categorical admission of link between violence and the extremist theology at a counter-terrorism summit in Mecca is a strong case in point.

Growing radicalisation in mosques and terrorists’ recruitments on social media is a common knowledge now. Seductive messages, in the false grab of Islamic doctrines, have caught the imagination of the Muslim youths in US, Europe and even the in Indian subcontinent.

Inspired by the neo-Kharijite extremist ideology, jihadists in thousands travel to the Middle East, particularly in Iraq and Syria, for terrorist training that sometimes brings the cancer of extremism back home. Besides, we have a cyber threat against pluralism, democracy and diversity. Given this, there is a pressing need for a categorical and collective clerical effort to counter thetheology of slaughtering innocent children, wantonly killing women and even Muslims offering prayers in the mosques.

We cannot accept any religious justification for the horrendous killing of innocent and non-combatant civilians whatever the motive, whatever the method or wherever the reason.

Action-reaction theory is run of the mill. If Muslims are really concerned about war on terror, every narrative of victimhood, denial and conspiracy theories should be deconstructed and dismantled.

The writer is an alim and fazil (classical Islamic scholar) and a doctoral scholar with the Centre for Culture, Media & Governance, Jamia Millia Islamia University