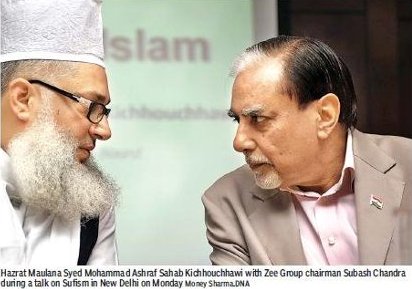 Sufism is all about tolerance and love…

Peacocks crying! Something about the sound of those birds at dusk makes for a richer soaking of the Sufi experience, all that of Rahim’s couplets and the need for harmony among Allah’s bandas. “Tolerance means bardash karna”. That’s how the talk on Sufismand Indian Islam in the brightly-lit auditorium begins. “But bardash karna”, continued the speaker, “in no way reflects the understanding of Islam, the message of Sufism, which lays a real emphasis on harmony and love, not merely tolerance”.

Held indoors at the plush Vivekananda International Foundation (VIF) in Chanakyapuri, the event, organised in collaboration with The Global Foundation for Civilisation Harmony, was presided over by Essel Group chairman Subhash Chandra.

The key feature of the event was the talk by Sufi master Hazrat Maulana Syed Mohammad Ashraf Sahab Kicchouchhawi (or as he was called, Hazrat sa’ab). Hazrat sa’ab, with his oratory skills, spends much of his time spreading awareness of the ‘real’ message of Islam — jehaad karna hai toh apne aap se karo, doosro pe mar karo.

Hazrat saab flew in from Bangladesh especially for the event and was received with much adulation; his message recorded on smart phones by many a rapt member in audience. While the welcome address was delivered by Ajit Doval, director of VIF and former director of the Intelligence Bureau — well versed in the poetry of Rumi — the introductory talk was left to a Dr Khwaja Ikram who warmed up the audience to Sufism being all about mohhabbat, and how that simple message of love is often easily distorted.

Once he switched from a prepared speech to extempore recitals of Urdu couplets, listeners lapped him up: Rahiman dhaga prem ka mat deejo chatkaaye, ek baar jo toot gaya, jude toh gaanth pad jaye (Don’t allow the delicate thread of love to snap; for once it snaps, it can’t be joined. And if you do rejoin it, it won’t be without knots).

Dr Ikram handed over the reins to Hazrat sa&aacute;b, whose words, logic and teachings Subhash Chandra said he was in wholehearted agreement with. And that it will be his personal endeavour to march shoulder to shoulder and side by side in the efforts to clear the darkness in people’s hearts and to make people embrace love and eradicate all the misconceptions in their heads about the link that Islam is supposed to have with terrorism.

Reminiscent very much of the popular Bollywood metaphor, courtesy Shah Rukh Khan’s famous, “My name is Khan and I am not a terrorist”, Subhash Chandra, in a fawn-coloured suit and a summery pink shirt, said he was personally very motivated by Hazrat saab’s talk. And while sharing that he is a follower of Buddha’s vipassna sadhna, where speech isn’t priority, he said he would say that “it is a pity and a bad thing to my mind that entire faiths and religions are maligned” for the misdeeds of a few, and committed himself to spreading Hazrat sa’ab’s message of peace, understanding and love. Not mere tolerance.