Prophet of Islam was sent as mercy for all humanity and to finish terrorism, intolerance, persecution and torture faced by the world. In his whole life Prophet focussed on social service. He not only followed religion but preferred social service as a part of worship. He Instructed people to avoid religious or social prejudice in order to help the needy. Islam teaches that we should not insult any religion. And nor should we harm any places of worship. We cannot get God’s blessing if we hurt any person. These ideas expressed by President and Founder of All India Ulama and Mashaikh Board Syed Mohammad Ashraf Kichhouchhawi  at  Ashrafi Chowk ,Shahi court, Saddam Husain Jama Masjid, Modasa, Gujarat on the occasion of  Eid Miladun Nabi. He said that the evidence on tolerance and patience of Islam can be judged from the fact that an old lady used to throw litter on Prophet but Prophet did not changed his path and nor he said anything to her, but when she fell ill Prophet  himself went for her nursing. Maulana Kichhochhawi appealed to the thousands of people at the venue “try walking on your elder’s path” .He asked everyone present to visit hospitals in their respective areas and to attend to patients and if possible distribute fruits on this auspicious occasion of Prophets Birthday. 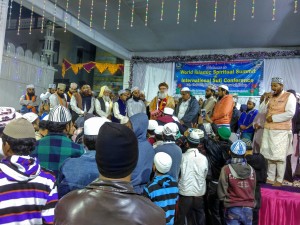 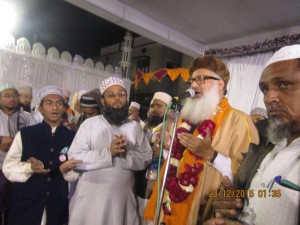 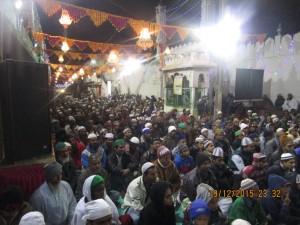 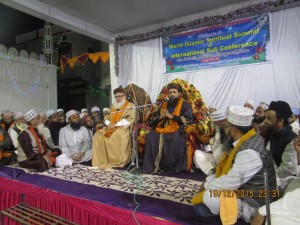 Hazrat Maulana Syed Alamgir Ashraf while addressing a public meeting (President of All India Ulama and Mashaik Board, Maharashtra), said today religious intolerance  has lead Muslims to fear a Non Muslim and a Non Muslim feels hatred hearing the name of a Muslim. Religious Intolerance is not taught in Islam and neither Islam can be spread forcefully by the power of Swords and Guns. It is sheer insult of Islam. Muslims should finish such ideology of violence and terrorism that is being spread in the name of religion from every part of the society. Muslims should also follow the footsteps of the Prophet and become an ideal for this society. Sufi Tradition is the only solution to this extremity that has spread in the name  of Islam.

Maulana Abdul Moid Azhari while addressing the rally said under the responsible leadership of Ashraf e Millat and with the support of the Ulama and Mashaik All India Ulama and Mashaik board has been spreading the Sufi narrative of Islam in India. After successfully organising Conferences, Protests,Gathering and Public Meetings AIUMB is determined to organise an International Sufi Conference on 20th March 2016 in Ramlila Maidan New Delhi. Hundreds of national and international scholars, intellectuals, Ulama’s and Mashaik will promote together the voice of Peace and tolerance in Islam. Spreading extremism in the name of religion is inhuman and one who does that is the real culprit in defaming that religion. Thus it is the responsibility of the leaders of that religion to come forward and confront these extremists and their ideologies. By Gods grace AIUMB has taken this initiative.

Apart from thousands of people present in the event, there were guests like

Loading...
Newer Post
The Entire Life Of The Prophet Muhammad (PBUH) Is Synonymous With Peace, Harmony And Tranquility
Older Post
Every Human Should Come Forward To Save Humanity And History: Syed Mohammad Ashraf