22nd December 2015 Visiting patients, planting trees, care for prisoners, orphans, and all poor sections of society must be given the paramount impor

Visiting patients, planting trees, care for prisoners, orphans, and all poor sections of society must be given the paramount importance in the month of Rabi al-Nur throughout the year.

“The spirit of philanthropy is well-embedded in all the teachings of Islam in general. However, when the Islamic month of Rabiul Awwal emerges with its shades of peace, love and mercy, Muslims must emulate the peaceful ideals of the Prophet Muhammad (pbuh). “ 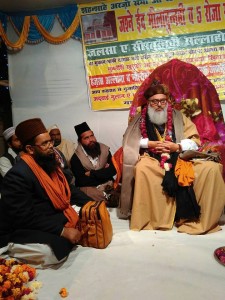 These views were expressed by Syed Mohammad Ashraf Kichauchawi , founder and president of All India Ulama and Mashaikh Board, an apex body of Sufi Sunni Muslims in India. He was addressing a spiritually inclined audience at a shrine in Agra, popularly known as Mu’afi Dargah Nabi Kareem, Sarae Bodla.

He said that “Muslims feel obliged to organise large-scale, profound spiritual gatherings and social and communitarian events on the occasion of Miladun Nabi in order to make special mention of the Prophet’s generosity of spirit, his social service and deep care for all creations of the world”. “Thus, common Muslim masses are given an abundant opportunity to apprise themselves with the holy Prophet’s life and his peaceful and humanitarian messages that exhort them to abide by the holy Qur’an and Sunnah, the sayings and traditions of the Prophet (peace be upon him)”, he said.

Syed Mohammad Ashraf Kichauchawi  further said that “the occasion of Miladun Nabi should be particularly meant for visiting patients, planting trees, care for prisoners and orphans. All weak and poor sections of society must be given special regards and attention in the month of Prophet’s birth, keeping this spirit alive throughout the year”. 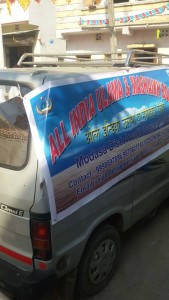 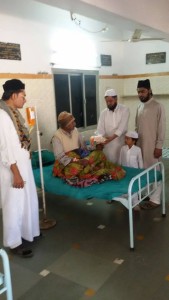 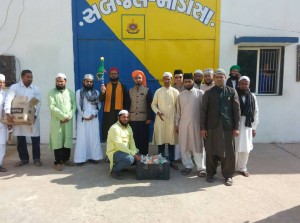 Speaking to reporters and media persons, he said that the traditional spiritual gatherings of Milad beautifully explain how gently Prophet Muhammad (pbuh) treated all peoples, regardless of their friends and foes. On this occasion, he said, we should recount glorious examples of the Prophet’s humane behaviour with peoples of other faiths and even those who professed no conventional belief. Syed Mohammad Ashraf Kichauchawi  proclaimed that the birth day of the Propeht Muhammad (pbuh) should be greatly valued as the “World Peace Day”.

The program was chaired by Maulana Mudassar Khan, whereas Maulana Ghulam Jabir Raza fulfilled the duties of an anchor of the event. It was held under the auspices of Sheikh Muhammad Shafeeq. There was a considerable number of Ulama, Mashaikh and imamas over there. Some of the notable among them were Mufti Waseem Ashrafi, Maulana Masroor Raza Qadri, Maulana Mohammad Ali, Jauhar Shafiqi, Syed Mohammad Ali Shafiqi, Qari Mushahid Raza, Maulana Matlub Hussain, Qari Hanif Qadri, Haji Mohammad Imran Ashrafi, Qari Nawab Iqbal, Maulana Dilkash Jaluni, Maulana Ahmad Raza, Maulana Sajjad Alam, Maulana Arshad-ur-Rehman, Sheikh Mohammad Amir Qadri. The program came to an end with the beautiful and glorious recitation of peace and greetings (Salat o Salam) upon the Prophet Muhammad (peace be upon him).

Loading...
Newer Post
The blessed family of Prophet Muhammad is flourishing as implied in Surah Al-Kauthar: The shortest of Surahs is replete with An Array of Mystical Allusions-New Age Islam
Older Post
The Entire Life Of The Prophet Muhammad (PBUH) Is Synonymous With Peace, Harmony And Tranquility