Religious scholars appealed to strengthen the public awareness campaign in Saurashtra, Gujarat in the meet of All India Ulama & Mashaikh Board (AIUMB)

Press release (Saurashtra, Gujarat) 17 January The Gujarat-based branch of All India Ulama & Mashaikh Board organized a meet in Saurashtra (Guja

The Gujarat-based branch of All India Ulama & Mashaikh Board organized a meet in Saurashtra (Gujarat) in preparation for the World Sufi Forum. The founder and president of the board, Syed Mohammad Ashraf Kichhouchhwi said: “It is the need of the hour that we spread the right knowledge of Sufism. There must be a clear distinction between the Muslims who promote peace and those who harbor the extremist tendencies”. 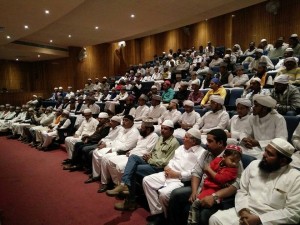 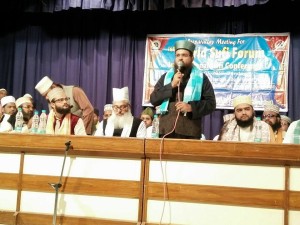 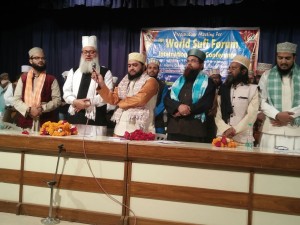 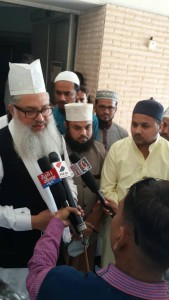 Syed Mohammad Ashraf Kichhouchhwi further said that one should not judge people by the similarities of clothes and the same outward behavior and apparent theory and beliefs. “Right from the Holy Prophet’s times, there have been hypocrites among the Muslims. Therefore, the holy Prophet Muhammad (saw) had to expel those who harbored hypocrisy in their hearts. Apparently, they looked absolutely like other Muslims but they used to make mockery of the teachings of the Prophet Muhammad (peace be upon him)”, said Syed Mohammad Ashraf.

He added saying that it is clear from the above Prophetic tradition that the present-day Muslims should also identify those who peddle hatred and nurture hypocrisy against the real teachings of Islam and thus should be far away from them. “They should keep themselves as well as other people abreast of their impending dangers”, he said.

Talking to the media correspondents, President of AIUMB Maharashtra Unit, Syed Alamgir Ashraf referred to the historical background of the extremist ideology that created all the doubts and skepticism in Islam and is continually trying to spread the chaos and mayhem in the same way.

Syed Alamgir Ashraf added saying that “Muslim Khulafaa (Caliphs) of all times witnessed this dangerous radical ideology. Though it kept changing its names and grabs, it remained unchanged and rigid in its ulterior motives. In the caliphate era of Hazrat Ali (r.a), the proponents of this extremist ideology started killing people with the help of a strong army. Two centuries ago, a man was born in Najd named Ibn Abdul Wahhab carrying the same thought and theory. That is precisely why the modern Kharijite is known as “Wahhabism”.

He continued: Wahhabi thought had its source in the extremist teachings of Islamist scholars like Ibn Abdul Wahhab. It is still creating the doubts and suspicions about the peaceful tradition of Islam in entire the world today. The Wahhabi trade is flourishing in the shadow of politics. Daesh and its sister organizations which are known as the neo-karijites are actually the military branches of this Islamist thought.

The Office Secretary of All India Ulama and Mashaikh Board Maulana Abdul Moid Azhari shed light on the chief aims and goals of the international Sufi conference titled “World Sufi Forum” which is going to be held in March, highlighting the relevance of India and Indian Sufi Muslims in the global outlook. He said that Muslims around the world have special hopes and expectations from the Indian Muslims.

“It’s about time for them to express their position openly. It’s time Sufi scholars, intellectuals, social workers and other professionals responsible for other departments create awareness and sense of responsibility combined with activism”, he said.

AIUMB Gujarat Unit Chief Ghulam Syed lauded the move and said that it was eagerly awaited for a long time. “We people in the Muslim community were suffering from anxiety and a strange pain. But All India Ulama & Mashaikh Board has created a noble platform for the religious scholars in India who can now brainstorm the satisfactory ways to resolve the concerning issues”, he said.

The meeting started with the recitation of the holy Quran and Naat along with the prayer of peace and Durud Shareef.