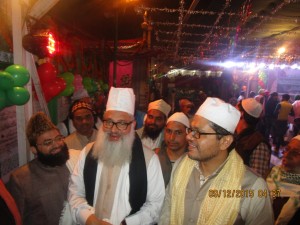 Celebrating 801st Birthday (Ghusal Sharif) of the leading Sufi Mystic of Delhi Khwaja Nizamuddin Aulia (also called mehboob e ilahi), countless devotees turned up to seek blessings at his dargah.
Popularly known as Sultan-ul-Mashaikh (king of the Sufi saints), Hazrat Nizamuddin Auliya was born on 3 April 1325. He emerged as one of the pioneers of the Chishti Sufi order in the Indian Subcontinent.  For him, true love for God was translated into sincere love for humanity. The surest way to attain personal relationship with God (wisal-e-ilahi), he believed, is to render selfless service to humanity. Therefore, he came to be popularly known as as Mehboob-e-Ilahi (God’s beloved).

One of the chief Sufi guests on this occasion, Syed Mohammad Ashraf Kichauchwi founder-president of the Sufi organization, All India Ulama & Mashaikh Board, said that “Mehbub-e-Ilahi’s legacy continues to foster the syncretic Sufi way of life in India. Cautioning people against fissiparous tendencies and rumours that have potential to rupture the secular fabric of the country, he felt that the Chishti Sufi tradition would help strengthen the secular fabric of the country. 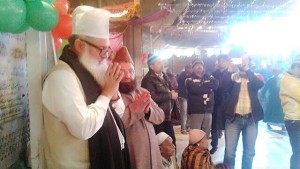 The 14th century Indian Sufi saint Hazrat Nizamuddin Aulia was born to Bibi Zulaikha in Badaun in, a town in the Western UP. His mother’s tomb is in Adhchini village, near the Indian Institute of Technology, Delhi, and is popularly known as Mai Sahiba ki Dargah. The 14th century historiographer Ziauddin Barani asserts that the overwhelming influence of this great Sufi on the people of Delhi was such that they had developed a highly evolved, progressive and secular worldview. He notes that Khwaja Nizamuddin Aulia (r.a) was the most influential Sufi mystic who represented the harmonious secular values of the Indian culture. Inspired by his spiritual masters, particularly Khwaja Gharib Nawaz Muinuddin Chishti of Ajmer, he espoused universal values in his mission of khidmat-e-khalq (service for humanity).

In the course of his conversation, Sufi Ajmal Nizami, Trustee and Gaddi Nasheen of Hazrat Nizamuddin Aulia shrine, stated that “at a time when Indian people were discriminated on the grounds of caste, he empowered people to transcend all distinctions of faith, caste, creed, region and race and thus became spiritual mentor for humanity at large”, he said.  Sufi Ajmal chanted excerpts from Hazrat Nizamuddin’s disciple Amir Khusrau’s Persian poetry:

Meaning: I am a pagan and a worshipper of love: the creed (of Muslims) I do not need; Every vein of mine has become taunt like a wire, the (Hindu) girdle I do not need. 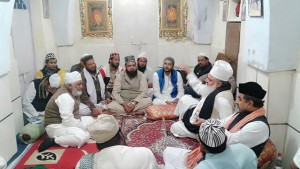 While sharing his reflections on the relevance of the spiritual Sufi ceremonies to the present turbulent times, Ghulam Rasool Dehlvi, classical Islamic scholar and English-Arabic-Urdu writer said that India has been the land of mystics and Sufi saints. He said that “the impact of Sufism, in contemporary India, can be seen through the prism of arts and culture”. He added that “the multi-faceted Sufi tradition reflects an essentially pluralistic and composite culture that connects people of this country beyond a great many barriers”.

Mr. Dehlvi continued: “The most redeeming features of Sufism’s appeal in India, as anywhere else, are its inherent openness, wide embrace, tolerance and its accommodating nature. Therefore, it is rightly considered a completely peaceful, non-confrontist and inclusive spiritual trend. No wonder then, a great many Indian Sufis, like Khwaja Gharib Nawaz Moinuddin Chishti of Ajmer, Baba Fariduddin of Pakpattan and Delhi’s Qutbuddin Bakhtiyar Kaki, Hazrat Nizamuddin Aulia and Chiragh Dilli left an everlasting and magnetic impact on the elite and common masses alike”. He said that it was indeed very stimulating that the Dargah of Hazrat Nizamuddin Aulia is keeping with its age-old dialogue-oriented tradition fostering interfaith harmony.

The 801st birthday celebrations of Hazrat Nimazuddin Auliya were held at the Hazrat Nizamuddin Dargah in Delhi. A large number of devotees came to offer their prayers and the shrine was decorated with lights and flowers. Every year, the birth celebrations take place in the courtyard of his dargah in central Delhi’s Hazrat Nizamuddin Basti, a historic village that also houses a Jahangir-era monument called Chausath Khamba and the grave of Urdu poet Mirza Ghalib.

Sufi Ajmal Nizami, trustee of the Dargah Sharif, said, “The 801st birthday of Hazrat Nizamuddin Auliya is a very auspicious occasion. We have hosted a grand function, where we had multiple Sufi cultural events such as Langar (distribution of foods), Qawwali (whole night), Ghusl (bath of the holy grave) and Chadar Poshi (offering Ghilaf) with a closing ceremony-Dua at the shrine.”  The ceremony also arranged a special qawwali session by the famed Nizami Bandhu (Nizami Brothers), who entertained the crowd with their trademark numbers.

As usual, the shrine’s courtyard played host to a qawwali session that lasted for the whole night. Despite the freezing cold weather, hundreds of people sat in the dargah throughout the night. They were very keen to be blessed on this special night, listening to the qawwalis and especially the verses (kalaams) of Ameer Khusro, the Sufi musician, poet and scholar whose tomb is also in the dargah, and who is an iconic figure in the cultural history of the Indian subcontinent.

However, in a single night, the qawwals could not cover the vast range of Khusro’s poetry that marks his infinite love for the Mehbub-e-Ilahi. It is worth mentioning that Khusro’s love arose out of the deep relationship and reverence he had with Hazrat Nizamuddin Auliya, looking up to him as his sole source of inspiration.  He strongly believed that the spiritual guru alone can transform one’s being into the divine, and this requires the complete surrender of the ego through service. No wonder then, Amir Khusro spent all his life serving in the kitchen of Hazrat Nizamuddin’s daily langar (food freely served to all the shrine visitors, without distinction of faith and creed).

The Entire Life Of The Prophet Muhammad (PBUH) Is Synonymous With Peace, Harmony And Tranquility 0