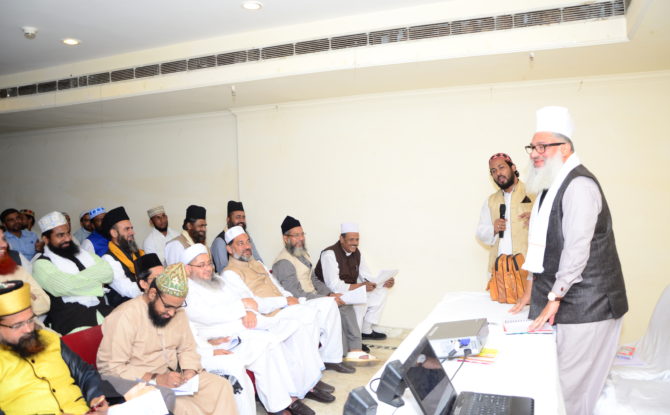 With an aim to take a step in the direction of the above stated objectives, All India Ulama & Mashaikh
Board (AIUMB) has planned to organise The World Sufi Forum in New Delhi, India. It will also host an
international seminar and a grand public conference. Hundreds of spiritual masters, scholars, Sufi
luminaries, Ulama & Mashaikh, Imams and Muftis from across the world are expected to take part in this
4-day event which is scheduled to be held at New Delhi from 17th to 20th March, 2016.
The conference aims to discuss the issues of extremism and find ways to work out effective
counter-narratives. With a number of Sufi-minded Islamic scholars, writers, journalists, university
academicians, social activists and grassroots workers, the event is targeted at finding more constructive
ways to spread the Islamic message of peace and tolerance as a counterattack on the constantly rising
global violent extremism.

While extremism has penetrated the Muslim countries in different forms, Sufi luminaries, Ulama &
Mashaikh, Imams and Muftis from all parts of the world need a strong consensus to contain the menace
of radical thoughts and religious extremism. They need to propound truly unique and immaculate
spiritual theories, which can enlarge the ambit of modern approaches to peace, non-violence and
conflict resolution. Interestingly, Sufis are not social scientists but their blend of ideas will be
instrumental in conflict resolution and sharing the message of peace. They have been speaking
emphatically about the significance of peace, reconciliation and counter extremism. Now is the time to
explore new paradigms to respond to the imperatives of modern context. Given their enormous faith in
the synergistic role of the diverse streams of Islamic civilization for the purpose of peace, their proactive
role and support is vital to foster peace & pluralism, and curb extremism, hatred, conflicts, or intolerance
in the name of religion.
The Event Organizer:

All India Ulama & Mashaikh Board (AIUMB) is an apex body of Sufi-oriented Muslims in India, which was
established with a clear objective of propagating peace, pluralism, tolerance, religious moderation and
reconciliation among different faiths and traditions. As clearly stated in its draft, AIUMB particularly aims
at disseminating Sufi teachings and practices to foster a composite Indian culture as an anecdote to
radical ideologies in the country.
About the Delegates:

We have invited distinguished scholars, Sufi luminaries, Ulama & Mashaikh and peace activists to
contribute papers in this epoch-making four-day event. We hope to bring together scholars of Islam,
peace, Sufism and other religions to share their papers on the pressing issues of global peace and to
discuss their ideas within a spiritual framework. The Seminar is of interdisciplinary nature. Therefore,
contributors are welcome to look at the sub-themes and other topics that are attuned to the parameters
of the main theme of the Seminar.