Friday Sermons in Indian Mosques Should Refute The Extremist Theology Of Violence And Xenophobia And Promote Positive, Pluralistic, Inclusive Values Of Islam?

By Ghulam Rasool Dehlvi, New Age Islam 27 Nov 2015 From countless stories we read emanating from the Muslim world, it is clear that extremist jihadi

From countless stories we read emanating from the Muslim world, it is clear that extremist jihadists’ atrocities are putting Muslims’ life in great jeopardy. Their hate-driven interpretations of Islamic fundamentals and doctrines are acting as the root cause for the widespread growth of extremist movements in the name of Islam. It shocks us to see how cunningly the extremist political Islamists join hands with the powerful nations in the world to serve their imperialist designs. It’s not difficult to see why the extremist outfits such as Daesh, al-Shabab and Boko Haram are hell-bent on capturing mosques and vandalising historical heritage which represents Muslims’ peaceful coexistence with other communities and cultures. 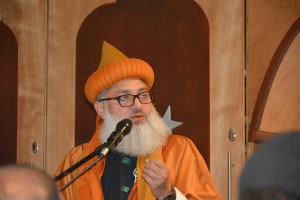 In this context, it is quite relevant to know what the moderate, peace-loving and spiritually inclined Islamic clerics and imams are doing to tackle this global threat. Recently, the Indian Sunni-Sufi cleric, Syed Muhammad Ashraf Kichhochhawi, founder-president of All India Ulama Mashaikh Board urged the Muslim preachers and clerics, most notably the imams of mosques, to rebut the extremists’ understanding of Islam in their Friday sermons. Speaking from a jurisprudential perspective of Islam, he stated: “The acts of terror perpetrated by the extremist jihadists of the ISIS fall into the category ofashad haram (severely forbidden in Islam). The terror outfits such as ISIS are shedding blood of innocent civilians loudly proclaiming to be ‘Islamists’ and chanting “Allahu Akbar” (Allah is the great). Obviously, this has defamed Islam, the religion of peace and tranquillity”. Thus, Syed Muhammad Ashraf, in his recent statement published in Urdu daily Inquilab, appealed to the imams of mosques to categorically denounce and refute the terrorist ideologies in their Friday sermons and other religious talks.

In view of the vital significance of Friday sermons and other khutbas (special religious talks) delivered in mosques, the above statement certainly assumes paramount importance. As a matter of fact, mosques and Islamic religious sermons (khutbas) have been misused by the hate preachers for vested interests and political ends. Therefore, this initiative should have long been taken in India, just as it has happened recently in North African Muslim countries, particularly in Egypt, Syria, Iraq and Morocco. Against the backdrop of radical Takfirist sermons echoing in the mosques in the Middle East, this sagacious step has been taken in mosques so that common Muslims could be saved from hate-mongering in the religious domain.

Clearly, any extremist organisation waving Islamic flags and misusing the holy Qur’an such as Daesh have actually no endorsement in the ambit of Islam. Any sort of support, openly or tacitly, to extremist activities through any means completely goes against the basic principles of Islam. But there are still an overwhelming number of mosque preachers who seem to live in denial and hence don’t utter a single word in the rejection of the extremist ideology. Their silence, of course, may be an outcome of their expedience or lack of information. But what about the Prophetic exhortations in which he urged Muslims, particularly the leaders of the Ummah, to stand against the evils at least by tongue or heart? It has clearly been stated in the hadith:

Regrettably, majority of our mosques all over the world seem to be captured by hardliners and less progressive Muslims. Having the great consideration for the noble position of an Imam, one would question how many of our imams the world over, strongly and clearly spoke against the extremists’ brazenly un-Islamic atrocities, except for a few moderates among them? Why do we not hear spirited, courageous and unequivocal words from this stratum of Muslim clergy on countering the extremist sermons? While it was their first and foremost duty to refute the hate-filled extremist sermons, they seem to be oblivious to this ground reality.

In any case, Muslims cannot discredit the role of the Imams in educating the common Muslims about the peaceful postulates of Islam. They have been the most important communicators of the Qur’anic messages in mosques and society at large. They can play a pivotal role in the complete eradication of extremist ideology that continues to radicalise many in our society.

At a time when the extremist sermons are delivered in certain mosques with an aim to serve the nefarious political agendas, moderate Imams and Islamic preachers across the world must unite and devise effective strategies to tackle with it. In fact, it’s time they seriously pondered over the radical interpretations of Islamic references that are damaging the gullible minds of Muslim youth. Most urgently, they need to restore the respect for mankind stressing essential humanitarian values in the minds of Muslim masses. In order to emphasise the need and significance of respect for mankind, they may relay numerous Prophetic sayings such as: “Those who are merciful will be shown mercy by the Merciful. Be merciful to those on the earth and the One above the heavens will have mercy upon you. The womb is derived from the Merciful, so whoever keeps relations with his family then Allah will keep relations with him, and whoever abandons his family then Allah will abandon him.” (Sunan At-Tirmidhi 1924).

However, there should be no disparity between the Sunni and Shiite imams in their pronouncements against the religious extremism. The Daesh (ISIS) terrorists have killed dozens of Sunni imams who refused to swear allegiance to them, while, on the other hand, they slaughtered the Shia community indiscriminately. It is about time the imams told their followers that these terrorists are violating the tenets of both Sunni and Shiite schools of thought. They have to make it clear, unambiguously and unequivocally, that the nefarious version of faith espoused by the ISIL, ISISI, Boko Haram, Taliban, al-Qaida and other Takfiri terrorists is a renewed version of the Khariji-Wahhabi ideology, antithetical to the mainstream Islamic faith. Ironically, while the IS terrorists vehemently and openly reject all the four major and canonised Islamic jurisprudential schools, the media ignoramuses call them “Sunni terrorists”.

It is indeed gratifying to see that both Shi’ite and Sunni Sufi leaders in India have jointly called for national unity to counter sectarian violence of these takfiri terrorists. Certainly, it will help the independent analysts understand that the dangerous radicals within Muslims are neither the Sunnis nor the Shiites, but rather a cult of the Wahhabi Takfirists.

Undoubtedly, we cannot successfully eradicate the cancer of extremism from the Muslim world, unless we engage the imams of both Sunni and Shiite mosques in this gigantic task. They have an acute grip over the Muslim community and hence they can better prevent the Muslim youth from falling prey to the ideological misguidance. There can be no better and more influential actors than the imams who get exposed to the community members to redress religious issues of their concern. Therefore, they have to be trained by the expert Islamic scholars and intelligentsia to tackle the religious extremists who try to recruit innocent worshippers.

To start with this task, they would better deliver Friday sermons backing law and order machinery of the country as much as our composite, inclusive culture, while speaking out against radicalisation. Besides educating the worshippers about the essential Islamic teachings and moral virtues, they should be addressing issues of moderation and extremism, national unity, social integrity, women’s rights, education system, youth issues, the rights of non-Muslims or even atheists and non-believers in an attempt to guide them on a right and moderate track. Most importantly, they should focus on societal reforms in their sermons urging the worshippers to avoid ideological extremism and uphold moderate views.

Unfortunately, most imams in India come from weaker family and education backgrounds and are unequipped to tackle the current issues of national and global concern due to lack of the required skills and sophistication. But still, they may influence modern and educated Muslims with moderate thoughts based on the primary Islamic studies. They must incorporate in their sermons the guiding peaceful Qur’anic paradigms, pluralistic Prophetic traditions and harmonious jurisprudential injunctions in an attempt to transform the present-day intolerant mindsets into an inclusive Islamic bent of mind. In a word, they need a major overhaul of their sermon designs with an incorporation of the true moderate Islamic views. That can effectively run down the extremist thoughts in the Muslim religious domain.