16 Dec. 2015 By Ghulam Rasool Dehlvi All India Ulama & Mashaikh Board organised the Ashraf-ul-Ambiya Conference to mark the 1447th birthday of t

The conference was inaugurated by a welcoming address by Qari Rahat Ali. In keeping with the Milad tradition, the conference started with the beautiful recitation of the Qur’anic verses by Qari Marghub and holy Islamic anthems (Na’ats) by Anwar Qadri Badayuni and Muhammad Nadeem. 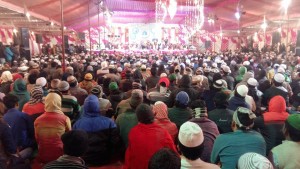 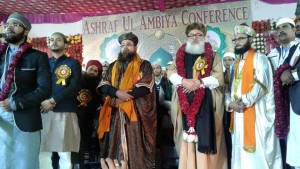 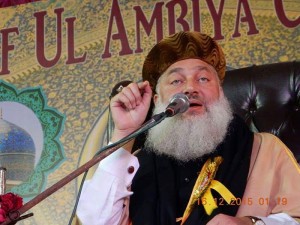 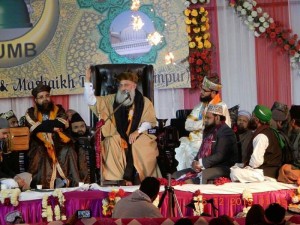 The chief guest speaker, Maulana Syed Muhammad Ashraf Kichchawchchvi, the founder and president of All India Ulama & Mashaikh Board, delivered a very comprehensive speech on the religious legality of celebrating the birthdays of the Prophets of Islam. He also touched upon various harmonious aspects of the Prophet Muhammad’s life and prophethood (peace be upon him). Quoting a number of Qur’anic verses and citing numerous examples from the Prophet’s life and traditions, he substantiated his point that celebrating the Prophet’s birthday and rejoicing the sheer bounties of God on this occasion is a complete and consolidated Islamic tradition with a historical background. He further said: “Holy Prophet Muhammad (peace be upon him) was indeed mercy for the whole world”. 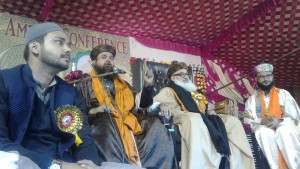 Connecting his speech with the ground realities of the present era, Maulana Syed Muhammad Ashraf Kichchawchchvi said: “today, violence is growing even among Muslims themselves. That is why the prophet PBUH, the messenger of love, kindness, peace and universal brotherhood, is being blamed and humiliated by others. Extremist Muslims have been misinterpreting the teachings of the holy prophet Muhammad (PBUH) in pursuit of their petty interests, thereby presenting a distorted image of Islam and the Prophet Muhammad PBUH.”

In his address, Maulana Syed Alamgir Ashraf, President All India Ulama & Mashaikh Board (Maharashtra) apprised the audience of the Prophet’s core teachings of peace, tolerance, inclusiveness and love for the humanity. He said: “Prophet Muhammad’s (pbuh) life is based on love, compassion, mercy and peace and all other precepts and practices of Islam are just manifestations of his teachings and characteristics.” He added that the greatest favour God bestowed upon the entire Ummah (including both Muslims and non-Muslims) is that “He raised amongst them His Beloved Prophet (PBUH) who took them out of ignorance, purified their souls and hearts, and provided them with spiritual guidance.”

Maulana Syed Maaz Ashraf also addressed the large gathering of audience. He highlighted the beautiful and peaceful aspects of the Prophet Muhammad’s life and message while enumerating some moving stories from the holy Prophet’s life in which he is reported to have shown abundant generosity and great respect to all mankind regardless of their faith and creed. He also explained how gently Prophet Muhammad (peace be upon him) behaved with non-Muslims, regardless of their friends and foes. He presented some of the glorious examples of the Prophet’s humane behaviour with non-Muslims.

Pictures: AIUMB Protest all over India and condemns terror attack on Uri and demands action against Pakistani Government 0