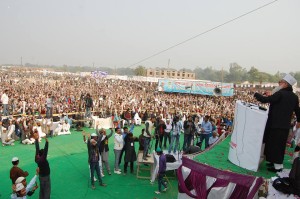 In a congregation of approximately 2  lakh Indians (mostly Sunni Sufi Muslims and Hindus alike) gathered at Wadi -e-Ashraf close to Sindurwa Road in Jagdishpur of District Amethi in UP which endorsed resolutions against Saudi /Qatar Led Wahabi/Salafi aggression in India.

A notable feature was unity of Mashaikh of different clans and clerics and imams who have never ealier shared a platform against wahabism in such a big way. The other more significant event was the presentation of two awards 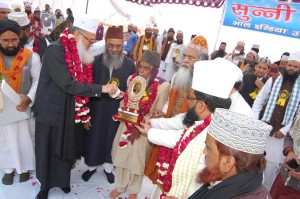 In this backdrop a review of the happenings during Jagdishpur Sunni conference needs to be seen as a prominent land mark in the Sunni movement spearheaded by All India Ulama & Mashaikh Board (AIUMB).

All the speakers openly condemned and countered wahabism / Salafism.

Hazrat Maulana Syed Mehdi Mian Moini Chishi, Chief Patron AIUMB & Gaddi Nashin Dargah Ajmer Sharif in his speech justified the mission of the board and in a scholarly address he summed up lot of activities undertaken by the board.

It needs a special mention that on the eve of 15th December Jagdishpur Conference the core committee of AIUMB met at headquarter of Mahona estate i.e. the residence of Raja Hussain Ahmad and it was decided that the seat lying vacant after the resignation of Hazrat Maulana Mahmood Ashraf, elevated to the position of National President be filled with the present General Secretary (G.S) Hazrat Maulana Syed Mohammad Ashraf Kichachauchwi. Syed Babar Ashraf (Who is expelled from AIUMB recently) was promoted to the post of G.S and Syed Hasan Jamee was brought in to replace him from the post of National Secretary (NS)

President Hazrat Maulana Syed Mohammad Ashraf Kichchauchwi launched, in his speech a frontal attack on the Wahabi /Salafi individuals and institutions who are at work to make Indian Muslims intolerant and tyrant. The main speaker, fondly called Ashraf –e- Millat, said that it is easier to claim possession and occupy Sufi waqf properties and mosques. He clearly said getting a Wahabi appointed in waqf board helps in obtaining a valid license of grabbing mosques. He asked the participants whether they want to know the name of the person. The app two lakh crowds at the ground answered in affirmation. He named the Wahabi cleric behind loot of waqf assets and grabbing of Sunni mosques in Uttar Pradesh. 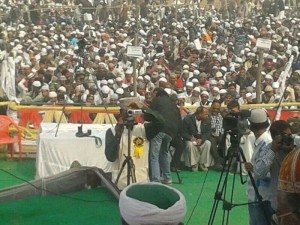 The crowd reacted. Ashraf e Millat Zindabad slogan was heard from every nook and corner of the ground situated at Utalwa, BHEL, sindurwa road, and open from four sides and giving access to every body who wanted to reach.

The president of AIUMB has declared that it is a must to stop wahabism /salafism before it becomes more  dangerous that it is seen today. The crowd was glad to lend its full support . Hazrat Maulana Syed Mohammad Ashraf Kichachauchwi said that the world thinks Muslims follow only two ideologies Sunni and Shia. While the truth is that there is a third week but powered by Saudis and is called Wahabi ideology. The same extreme extraterrestrial ideology which is creating havoc every where in the world and yet not courageous enough to declare itself as Wahabi. 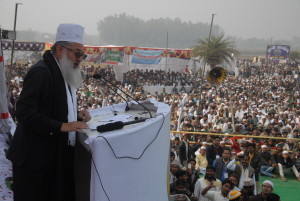 The question is why they come down to take refuge in Sunniyat? He answered because this is the only acceptable name in India the home of second largest Muslim population of world. This Wahabi ideology could gather more strength in independent India because it could gather government patronizing. And now trying to capture Muslim monuments and mosques wherever possible to provide strong base to wahabism .He described the wonderful story of a mosque which was captured by the wahabis with active connivance of WAQF Board .that mosque was finally liberated by Sunnis in due course. But the other masque in Kanpur U.P. is not as much fortunate to be liberated. The crowd protested against interference of waqf board and declared its support to All India Ulama & Mashaikh Board, by instantly chanting “Ashraf-e-millat zindabad”.

He said that Saudi Arabia and Qatar have been protecting and funding an ideology which is very injurious to world peace and humanity. He named all the Islamic economies that have been targeted by wahabis and to place an instance of worst kind of wahabi terror he narrated the story of demolishing the tomb of Hazrat e Hujr Bi Adi, a companion of prophet and a close friend of fourth Caliph Hazrat Ali . 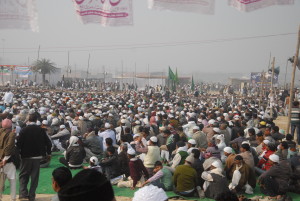 During the whole address by Hazrat Maulana Syed Mohammad Ashraf Kichachauchvi the crowd supported his arguments by slogans. Sometimes “Hum tumahre saath hain” was also a regular chant. He was striking some sort of personal chord with the audience because almost every one knew Hazrat Maulana Syed Mohammad Ashraf Kichachauchvi personally. Had heard him earlier and wanted some favorite repeats from his earlier speeches and sermons. Demands like “JALKUMBHI JALKUMBHI “could bring old pieces of expression back to life in this conference Hazrat Maulana was generous to repeat old expression, phrases, idioms, events and icons to bring his point home and acceptable and memorable.

Hazrat Maulana Syed Mohammad Ashraf Kichachauchvi capped his speech with a declaration that from now on, AIUMB is the organization of every Sunni. His declaration was again greeted by huge supporting hands shown by he followers and disciples. Amethi, as a parliamentary constituency, is much sensitive and the general Muslim population was showing lot of interest in AIUMB and its president. 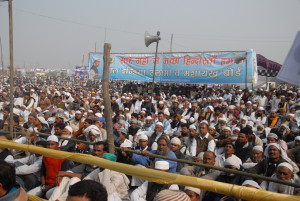 That was evident from the presence of hundreds and thousands of people coming to the ground with banners and flexes on four vehicles and two vehicles and also by public transport, trains and other modes of transportation. The 5 districts of Faizabad commissionary Sultanpur, Amethi, Barabanki, RaeBareli and Faizabad participated in big way.

Syed Tanvir Hashimi, Said that whenever the fact comes to claim its position on stage the fiction has to fade out. The good news of coming the fact closer to claim its space is not national it is global. Sunniyat is not only a scholarly issue. It is a way of life which insists on lot of things badly disregarded by wahabis. He said Sunni Muslims need to protection. They need unison and accord. The galaxy as seen on this platform says the unity has taken place. It is now visible.

Syed Alamgir Ashraf compared the event and on his turn as a speaker took up his famous line Wahabiyon Ki Na Imamt Qabool Hai Na Qayadat Qabool Hai.( We neither accept religious leadership of the wahabis nor we would accept the political guidance.He recalled the Martyrdom of Syedna Imam Hussein. He invited the gathering to become Hussani.

Maulana Syed Ahmad Ashraf accepted in his speech that Sunnis have erred in keeping their mosques inhabited. They did not care to secure them and so those mosques went under the control of wahabis who were struggling to get some foothold in mosques and monuments.It was an invitation to grabbers .They are still in poor invisible minority , yet they have learnt the art of grabbing mosques and snatching monuments with active connivance of the waqf boards and local administration., thanks to our failure to unite and put up our case strongly.

Allama Shoaib Raza Hashimi spoke on the devoted services of mashaikh and ulama in social transformation and their contribution to the independence movement.He along with others named Maulana Fazle Haq Khairabadi and said there lot of sunni sufi clerics who gave their supreme sacrifice .

Among others the mashaikh and clerics who took active part in this sunni conference are the following :

Maharashtrra, Karnataka and Gujarat were also represented by their delegates.