Sunni Sufi scholars that met Prime Minster Narendra Modi on 27th August 2015 were satisfied with the meeting and to a high degree also thankful to the PM who demonstrated regard for Mashaikh, Sunni Sufi scholars, educators, academics, teachers and leaders included in the delegation. 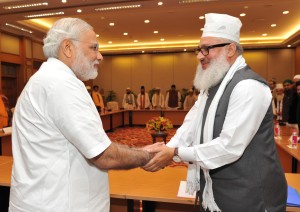 Hazrat Syed Mohammed Ashraf Kichhowchhawi said the meeting was successful. He said the real changes can be brought in the society only by interacting and seeking intervention of the top level administrators and authority of the country. He mentioned that he was happy that delegates told him separately that they were glad that The Prime Minister was taking keen interest in the demands presented and was personally taking notes. This shows his seriousness towards making real changes. He said the interaction with the Prime Minister was very Positive and friendly. He later said that Sufism is an international phenomenon. It has a following of millions across the world. And India can relate to this International appeal very well As India has rich Sufi background. He appreciated the Prime Minister’s comment that Globally where Sufism is strong ,Peace is strong and where Sufism is weak, terrorism is strong  . Prime Minister rightly said that Wherever Sufism is Strong Terrorism could never place foot. Also mentioning Kashmir in his remarks he said When Sufism went weak there Terrorism got strong. And this statement from the Honourable PM was very appreciated by the AIUMB Sufi delegated from across the Nation. 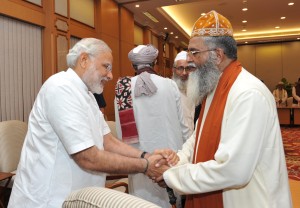 Hazrat Syed Mehdi Miyan Chishty (Dargah Khwaja Gharib Nawaz Ajmer Sharif) said after the meeting that it was beyond comprehension. PM demonstrated courtesy and has extended to the Sufi delegates a sense of being recognized through their philosophy of Unconditional Love and Loving the Country unconditionally. Hazrat Mehdi Miyan Chishty said Shri Narendra Modi was admirably receptive to the Sufi individuals and their ideas. Honourable PM had a considerable understanding of the Sufi Philosophy and he was very comfortable and home to the idea of Sufi Islam and its relevance in today’s India. 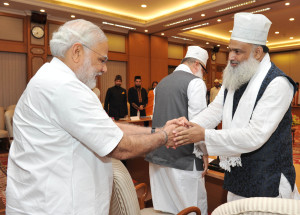 Hazrat Syed Jalaluddin Ashraf (Makhdoom Ashraf Mission) said we must thank PM Shri Narendra Modi for the patience he demonstrated while listening to the representatives of Indian Sufi Muslims putting forward their ideas, thoughts and suggestions.

He said this meeting was successful beyond our imagination. PM Shri Narendra Modi endorsed our well established belief that Sufism has contributed to pluralistic culture of India. 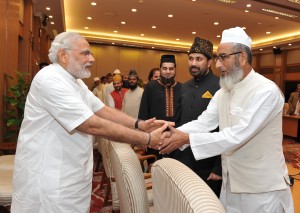 Hazrat Shah Ammar Ahmad Ahmadi (Sajjadah Nashin Dargah Makhdoom Abdul Haq Rudauli) said that PM Shri Narendra Modi knew that hardliners can be controlled through propagation of the Sufi Culture in India, as the case is everywhere around the globe. 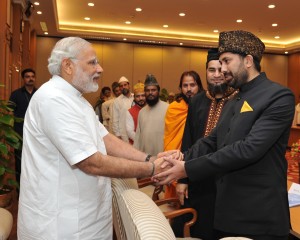 Syed Salman Chishty (Chishty Foundation) said his insistence on promoting Sufi literature and Sufi music across India is remarkable. As well as sharing the Sufi heritage of India with the world on priority basis is needed to lead the world towards Peace and Unconditional Love for all. He was of the view that the delegation was well received by Honourable PM Narendra Modi sahib and PM was kind enough to listen and learn about the problems on Indian Muslims. We greatly appreciate His keenness of taking notes of connecting leading Sufi cities of India like Ajmer Sharif and Kichchawcha Sharif to Konya in Turkey and Philadelphia in USA. 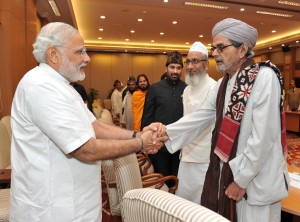 “The ideology propounded by Sufi saints is integral to Indian ethos but forces of extremism are trying to weaken it, Prime Minister Narendra Modi heard the  Sufi scholars with patience who asked him to work for development irrespective of caste, community or religion. Hazrat Nizami said that this truth was never earlier accepted by any Prime Minister of India. We expect to have a regular correspondence with the PMO through the office of AIUMB. 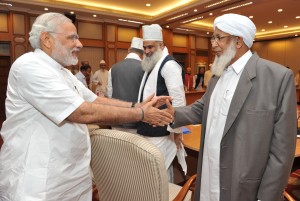 Sheikh Aboobacker Ahmed Musliar (Kerala) said that PM Shri Narendra Modi knew the truth and that is why he clearly said. “The ideology propounded by Sufi saints is integral to Indian ethos but forces of extremism are trying to weaken it,” and this assertion vindicates the much publicized stand and voice of AIUMB. 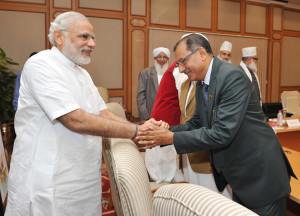 Mr Nisar Ahmad (Ex President ICSI) was happy from the meeting. He said that as he spoke to the Prime Minister about the importance of educational reforms for the Indian Muslim and also emphasized on Skill development programs for Indian Muslims, he was amazed by the thoughts and vision of Honourable PM Modi.

Honourable Prime Minister gave a lot of Insight on the great Craftsmanship skills Indian Muslim always had. PM said we can use this inbuilt skill to better use by harnessing this talent to make India prosperous nation. He said government will take initiative to make this a reality and government is already launched many policies, schemes and will work on more. 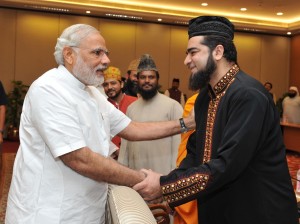 Hazrat M.K. Chishty (Gujarat) said that now our self discovered and practiced mission has at least one backer that is Prime minister of India because in course of discussion, Shri Narendra Modi was candid that we will have to counter such extreme forces through various avenues including on social media, so that the ideology of extremism does not take root in India.

Khawaja Farooq Renzushah from Kashmir said that Prime Minister has rightly diagnosed that tradition of Sufism has kept evil at bay, wherever it has continued to flourish. He was also appreciative of the statement of PM in which Shri Narendra Modi exhorted the Muslim community in India to take maximum advantage of the skill development schemes and programs being initiated by the Union Government. Khawaja Renzu Shah said that the best thing is that Prime Minster was kind and wanted to see Indian Muslims coming up to take part in nation building process and also reap benefits from Government schemes. 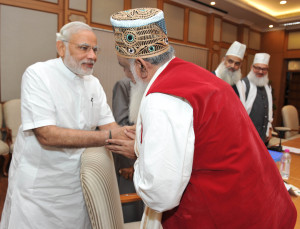 Janab Mohammed Salim Ashrafi – Chhattisgarh said the he was very happy to hear from the Honourable PM about the reformations and transformation of the Waqf Board across India giving priority representation to the majority Sunni Sufi Muslims. 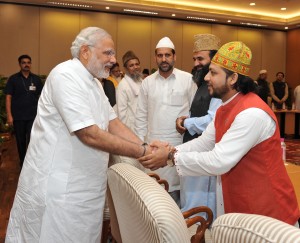 Janab Sufi Ajmal Nizami ( Hazrat Nizamuddin Auliya Delhi ) – underlined  the importance of involving youths in nation building activities as the Honourable PM have rightly mentioned that 65% of Indian population in under the age of 35 years and there immense opportunities and possibilities to utilize this huge youth talent pool for state and nation building activities.