Every Human Should Come Forward To Save Humanity And History: Syed Mohammad Ashraf

[Press Release]   Ahmadabad 19 Dec, 2015.   It is the good fortune of our country that whenever someone has gazed this with evil eyes  all th

It is the good fortune of our country that whenever someone has gazed this with evil eyes  all those have stood alert to resist. Whether it is the crime of creating hatred by the outsiders , enslaving the country through tactics or creating hatred against the culture of the country by some local elements, each case has witnessed resistance from the patriot forces who equally love the country and its culture. The practice followed is that without being influenced by religion a crime was called a crime and every attempt was done to cleanse the society from this kind of thinking that hurts.

This was stated by Hazrat Maulana Syed Mohammad Ashraf  Kichchawchchvi, the founder and president of All India Ulama &Mashaikh Board[AIUMB] at Masada , Ahmadabad of Gujarat in a huge gathering  today called to prepare ground for the World Sufi Forum [International Sufi Conference] to be held in national capital New Delhi in March, next year. 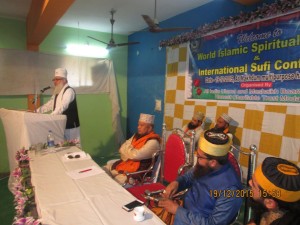 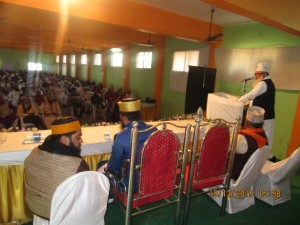 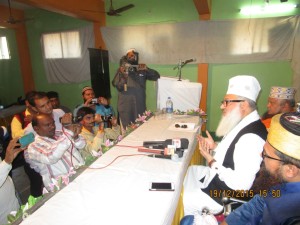 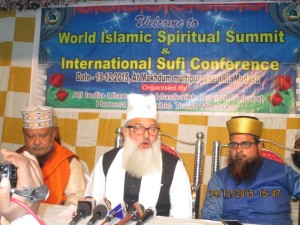 He said that today India is facing two kinds of problems. Intolerance and terror. Beyond this is the irresponsible rhetoric that is deteriorating the already tense atmosphere. This makes it necessary for everybody, belonging to each class cast and creed to come forward and align against the provocation and misinformation.

After the meeting Hazrat Maulana Syed Mohammad Ashraf told the media persons that the way our laws and our constitution is  sanitized  from any religious bias  and bigotry , the same way our society must be sanitized from these evils. The mantra for development of the country  and welfare of the humanity lies herein.

The meeting was also addressed by chief of Maharashtra Unit of AIUMB Hazrat Syed Alamgir Ashraf said that we have decided to throw away dirt from our society . We have been reaching the masses and leaders for last 10 years  as a part of mass contact program. We have been addressing more than one meeting a day in every nook and corner of the nation and educating the people that this is the land of saints and Sufis. It never happened nor will it happen that our humanist tolerant society is reduced to the land of religious bigotry. These national traits will always remain safe from destruction .We have observed that since last  one century this new trend is showing its ugly head. Our  ancestors have always delivered service to humanity as a religious chorus. And hence under the banner of AIUMB we stood against the enemies of the country and humanity . We have requested everybody from media to administration to help us in carrying out this job .

Abdul Moid Azhari , office In-Charge of AIUMB Delhi  played a  documentary to show the dangers hidden in the actions of hate mongers and terrorists. He also narrated what steps AIUMB has taken to educate the masses against the twin problems of terror and religious bigotry. He also gave details about the  International Sufi Conference named World Sufi Forum [ global forum of peace , love and humanity] under the banner of AIUMB which will go on for three days in March 2016. He also said that after several huge conferences in several states of India including National Capital Delhi, now AIUMB embarked upon organizing an international Sufi Conference to be attended by 40 foreign Mashaikh, intellectuals, clerics and scholars besides some 200 important personalities of several states of the country. Meeting was held under the presing of Hazrat Maulana Ghulam Syed President gujrat (AIUMB) and with collaboration of Honest Charitable Trust Modasa Gujrat. The meeting was attended by Imam, Teachers, intellactuals, sociolist, responsibles of all social sects specially Maulana Syed Muhammad Ali Baba President Banaskantha, Maulana Syed Hasan Ali vice president Banaskantha, Rasheed Saudagar General Secretary Sambharkantha, Dr Shahid gailal Advisor AIUMB Gujrat.

The meeting ended with Salat o Salam and special prayers from the president of AIUMB.

Prominent Pakistani cleric tells India and Pakistan to unite in their fight against terrorism:DNA 0

Wahabi ideology is a threat to India’s internal security: AIUMB 0