All India Ulama & Mashaikh Board organized an assembly of Delhi’s Imams, Islamic scholars and clerics at the headquarters of the Board New Delhi,

All India Ulama & Mashaikh Board organized an assembly of Delhi’s Imams, Islamic scholars and clerics at the headquarters of the Board

The preparations of “International Sufi Conference” which will be held in the Ramlila Maidan in Delhi, are in full swing. In this regard, Delhi’s Imams, Islamic scholars and clerics and teachers of the representative delegation of the AIUMB met the Founder and President Syed Mohammad Ashraf Kichhowchhawi. The meeting was organized today by All India Ulama and Mashaikh Board (AIUMB) in its headquarters in Delhi. 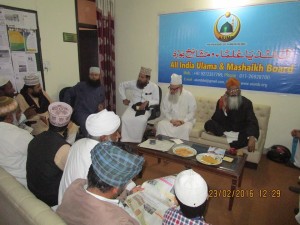 This assembly was aimed at reviewing and revising the strategies and ongoing preparations of the “International Sufi Conference”. Both Islamic clerics and teachers developed an action plan to work faster and more accurately and efficiently for the inception of the 4-day World Sufi Forum, of which the last day will be a Declaration Day, entitled “International Sufi Conference”.

The board’s founder-president said that there are some baseless misunderstandings and allegations against the World Sufi Forum’s agenda that are being made publicly by some “ill-intentioned elements” with their “ulterior motives”. Though this has caused an unfavorable situation, however, he averred, it’s time we better pay heed to the future historical accomplishment of the conference. This will be the “befitting retort” to the ill-designed agenda and “flimsy rhetoric” of those anti-Sufism elements.

He added saying that in the wake of the World Sufi Forum, AIUMB will take up such measures that can alleviate the deteriorating intellectual situation of the Muslim community.  “For over a decade, the Indian Muslims too have been forcibly steeped in the same conventional thinking that breeds the grounds for victimhood narratives and conspiracy theories”. “We have to look within, introspect and learn from the mistakes that we have, consciously or unconsciously, done in the past. This is the only way we can get through this turbulent phase of the time”, he further said.

Speaking at this assembly, Syed Mehdi Mian Moini Chishti, the custodian of the holy shrine of Ajmer Sharif expressed his ideas on the contemporary relevance of the World Sufi Forum. He said: “This conference is the pressing need of the time. Sufis have been the main bearers of the social cohesion in the domain of religion. But it is deplorable that their religion today is being conflated in media with divisive acts and thought due to the handiworks of the extremist and religo-fascist elements.

Syed Alamgeer Ashraf (President, AIUMB Maharashtra) stressed to focus on the universal messages of Islam in both the Sufi conference and seminar as part of the World Sufi Forum. Other Ulama and Imams who came attend this meeting also expressed their views. They unanimously agreed to the desperate need to revive and rejuvenate the Sufi tradition to mitigate the rising tensions across the world.