Press Release Laren, June 2, 2022· From Rabbis to Sufis, from Swamis to Sikhs - practicing spiritual leaders from around the world gathered in 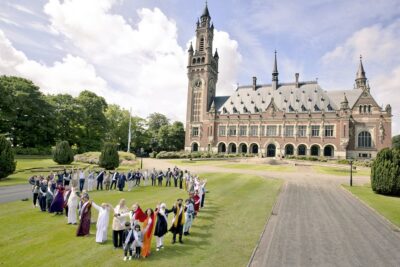 From Rabbis to Sufis, from Swamis to Sikhs – practicing spiritual leaders from around the world gathered in The Hague, Netherlands, to draw global attention to the need to preserve the sanctity of holy water sources, to protect water bodies from pollution and ensure clean water provision for all in the world, leaving nobody behind.

The Living Peace Projects Foundation organised the ‘Water for All’ conference in the Peace Palace, where participants from the business community, among others, could enter into an interactive dialogue with the spiritual leaders present about the dire need for awareness and cooperation for action. Erik de Baedts, the Director of the Peace Palace, The Hague, received the first copy of the educational “Water Springs”, a special book which the spiritual leaders have worked on together. 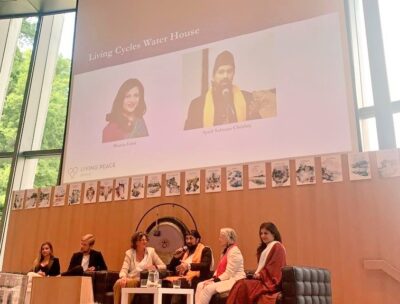 Haji Syed Salman Chishty, General Secretary of All India Ulama & Mashaikh Board (AIUMB) and Chairman of Chishty Foundation, Ajmer Sharif, India participated ‘WATER FOR ALL’ Conference, he came from land of Hazrat Khwaja Moinuddin Chishty known as Khwaja Gharib Nawaz, Ajmer Sharif, India. Delivering his lecture on the Importance of Water in the Islam, he quoted the verse of The Holy Qur’an “… And we send water down from the sky, in measure, and allocate it on Earth, and lo! We are also able to withdraw it.” – The Holy Qur’an (23:18).

He further added, until we actually stop to think about it, it can be easy to take the natural resource that is water for granted. While we do not tend to see or realise just how much water we waste on a daily basis; it is still something very valuable to life and something that many people around the world are lacking in and praying for.
In today’s convenient world, we often don’t think twice before wasting water on unnecessary things such as washing our cars or just running the tap waiting for the correct temperature. When we run a long bath, flush the toilet, excessively wash dishes, brush our teeth or spend extra time in the shower just because we feel like it – it can be easy to forget about those who are in desperate need for something we all too often waste. He added.
As one of the most important elements in nature, water is needed and required for almost all life and everything that we do relies upon this wonderful element.
Haji Syed Salman Chishty further added, water is a valuable resource in both life and in the ways of Islam, and as such, it is considered a great charitable act in Islam to give water to another living thing on earth. Such act is greatly rewarded and brings us closer to Allah SWT.
A living thing can be another human being, an animal or even a plant; these are all Allah SWT’s creations.
He also quoted the narration of The Holy Prophet (PBUH): “The best form of charity is to give someone water.”
Another way we tend to waste water is in the performing of wudhu (ablution); it is not necessary to overuse water during the performance of ablution, so long as what you are using is sufficient enough to complete the necessary ghusl. There are many ways in which we can save water in our daily routines, such as using a small bucket of limited water in which to perform ablution with, or turning the tap off whilst brushing our teeth -along with many other ways we can look into recycling water. Chishty added.
“… And waste not by excess, for Allah loves not the wasters.” – The Holy Qur’an (7:31)

The simple act of giving someone water is highly rewarded in Islam, so imagine the reward for giving the use of a water source? This is regarded as sadaqah jaariyah and its rewards will benefit the giver even after their demise – so long as others continue to benefit from this given source of water.
Such an act of giving can be done by way of donating towards our water and sanitation projects. These allow us to dig wells for those in need and provide water pumps where needed. Even if a bird drinks from this source of water, the giver will benefit and receive a blessing for it. Giving access to water and sanitation can help save lives. Our water campaign aims to deliver water sources to those in need, and include anything from hand pumps to digging a well to building a water purification plant; your donation goes towards making a huge difference for someone in need.

A number of young representatives also took part in the interactive dialogue. Prubleen Kaur Bhogal from Birmingham, aged 16, stated “Sacred Water is a tangible connection to my Gurus.” Mila Mohan, aged 13, said “this book has to be in every library.” Syeda Samar Chisty from Ajmer Sharif,India aged 5, added “if you save water, water will save you.”

The ‘Water for All’ Ceremony 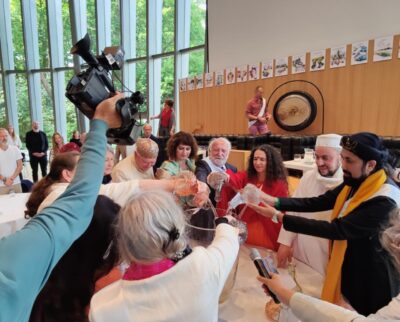 The highlight of the conference was the ‘Water for All’ ceremony, wherein, water from eighteen sacred sources was brought and merged together, representing the oneness of spirituality, creation and humanity. Afterwards, the merged water used to create exquisite glass water jewel pendants, to wear as a symbol of solidarity with the mission. The proceeds of these Living Jewels will benefit the water projects of Living Peace Projects. 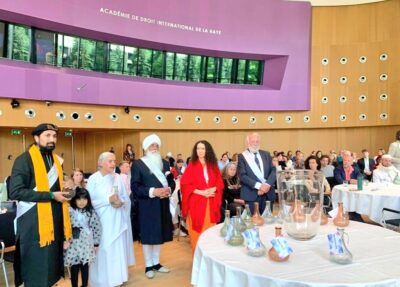 The very first ‘Water for All’ ceremony of Living Peace Projects, took place in Assisi, Italy, in June 2018, which was immediately preceeded by a visit to Greenland, to bear witness to the melting of the ancient glaciers, sacred to the native population. Other events have included a trip to the Kumbh Mela in February 2019, and Palpung Sherabling Monastery in February 2020. 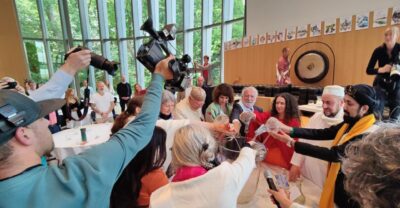 Living Peace Projects is a non-profit initiative founded in 2018 in the Netherlands by Brigitte van Baren and the late former Dutch Minister and IMF leader Prof. Dr. Johannes Witteveen. The primary aims of the initiative are to preserve and protect holy water sources while ensuring that clean water is provided for all, leaving nobody behind. Each ‘Living Cycles’ water house can harvest and purify rainwater for use as clean drinking water and sanitary facilities; the energy required for this is generated using solar technology. The foundation is assisted in its mission by an Advisory Board of nine spiritual leaders from various traditions and beliefs. Amongst them are leaders from the Christian, Buddhist, Hindu, Sufi, Sikh, Jewish and tribal traditions. Additionally, nineteen spiritual ambassadors are associated with this Advisory Board. See livingpeaceprojects.org for further information. 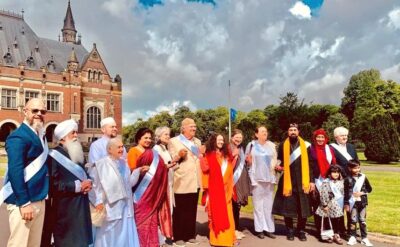 On the closing remarks Haji Syed Salman Chishty said “Cleanliness is Half of Our Faith” Prophet Muhammad(PBUH). If there is no clean water we have no personal hygiene or cleanliness and Gaddi Nasheen Haji Syed Salman Chishty extended warm regards and thanks on behalf of India and extended the personal invitation to all Sufi Spiritual leaders to visit India and experience the rich spiritual and cultural heritage of India.

A nod to The World Sufi Forum for peace must prevail:Times of India 0