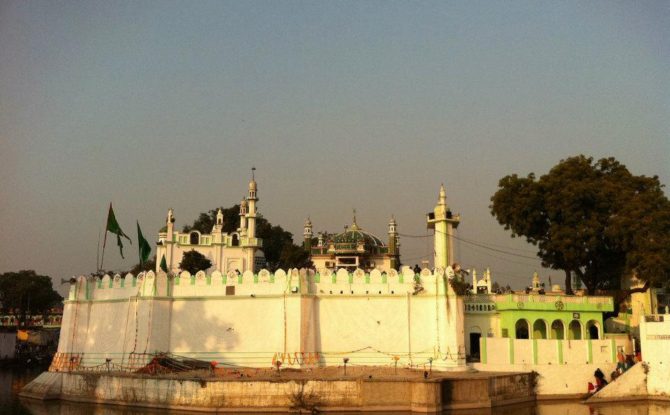 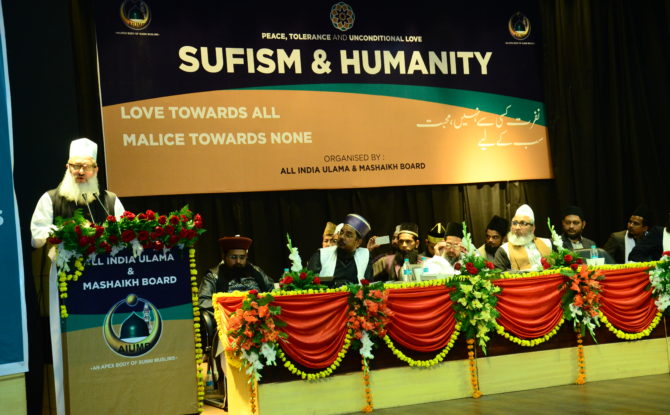 The All India Ulama & Mashaikh Board, the apex body of the Sufi Sunni Muslims in India, held a national seminar:  “Sufism and Humanity”on 4th December in Vishweshvaraiyah Auditorium in Lucknow. 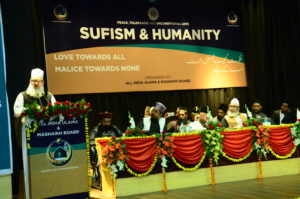 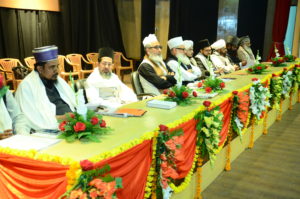 Sufi Sunni ulema and intellectuals with various backgrounds spelled-out their opinions on the current ongoings. Several Indian Sufi clerics, who run some of the largest Sunni Islamic seminaries in India, seemed worried about the growing phenomenon of pseudo-Sufism or “neo-Sufism” dressed in diametrically different political forms.

The national seminar on Sufism was held in the wake of the recently organised 33rd annual conference of the Jamat Ulama-e-Hind in the largest Sufi shrine in the country, Ajmer Dargah — perhaps for the first time in the Indian history. AIUMB averred that the Ajmer Dargah was dragged into a well-worked-out political campaign by Jamiat-Ulama-i-Hind (JUH), an avowed supporter of the Congress party. The key members of the JUH whose ideologues have clearly and categorically declared Sufism as “anti-Islamic”, chose to hold their 33rd annual conference in the prime Sufi Dargah in India, Ajmer Sharif in Rajasthan. “It was an out-and-out political attempt to woo the mainstream Indian Muslims anchored in age-old Sufi traditions”, said the various participants and speakers at the Sufi seminar in Lucknow.

It is noteworthy that the JUH had castigated the Sufi practitioners as “pseudo-Sufis” in the past. Therefore, the Sufi Ulema asked as to “how would the JUH like to brand itself now when it has held its 33rd largest annual conference in Ajmer using the prime Sufi shrine in India for its own political ends”?

The Lucknow Sufi seminar’s key participants — 30-40 Khankaah’s representatives present, 200 Ulema’s Attended and in total the auditorium was filled with 1000 person .They exhibited great zeal in strengthening the foundations of Sufism to combat all the forms of violent extremism. 15 Selected Papers were presented by Sufi Scholars.It was widely covered in the Newspapers,Specially Urdu. Few Papers gave special 4 pages in all the editions of there Newspapers.

Remarkably, while the Lucknow Sufi seminar stressed on composite nationalism (muttahida qaumiyat), inclusive democracy (jumhuriat) and pluralism (qaumi yakjehati) in its final-day declaration, the annual conclave of the JUH in Ajmer promoted the religionist and sectarian narratives.

Hazrat Maulana Syed Mohammad Ashraf, founder and president of AIUMB inaugurated the seminar and spoke at length about the misdeeds of Wahhabi/ Salafi elements that are tormenting social fabric in the country and  creating an atmosphere of  confrontation.

He also said that  AIUMB has succeeded in exposing all the Wahhabi/ Salafi elements in India and to such an extent that they are now in the process of recreating their  new identity card. He said that all of a sudden  in a long history of 100 years , Jamiate Ulema e Hind has woken up to claim Hanafi and Chishty tag to save its  reputation which has well been tainted by thier  proclaimations, practices and  presentations.

The books written by Wahhabis in these 10 decades bear testimony of their adherance to wahhaabi ideology and  their strong will to propagate the ideology through speeches, books , curriculum and teaching  and preaching.

Now they are at a loss to remain attached with the tag and want to misguide the people and the government by claiming  to be Sufis. Hazrat Khawaja Moinuddin Chishty was under attack for 100 years and now the great saint of all times has gathered the attention and respect of all those that took pride in hurting Dargah culture for decades.

The seminar was  organised at Vishweshwaraiah auditorium and was well attended function. people from all shades of life and far flung areas  from different parts of country came to attend the seminar. A memorandum was also shared with the administration on the same.

Not long ago, in March 2016, World Sufi Forum was slated as the first-ever mega Sufi event of counter-extremism with more than 200 international dignitaries from 20 countries. Though seen as the first and last event as such, it, however, seems to have begun an unending onslaught on the particular ideology which the Sufi forum believes is a grave threat to the country’s pluralistic ethos.