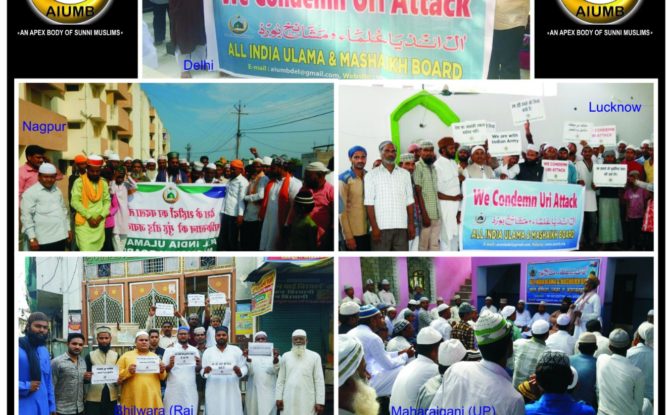 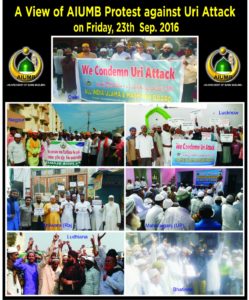 All India Ulama & Mashaikh Board [AIUMB] has while condemning terror attack on Military camp at URI in Kashmir has criticized Pakistani establishment for creating havoc in the lives of People of Jammu & Kashmir who have otherwise identified with India and taking part in all constitutional and administrative institutions of the country.

President of the Board and founder Hazrat Maulana Syed Mohammad Ashraf Kichchawchchvi said in a statement released from Chittorgarh of Rajasthan and read in all the unit meetings that, Islam never allows killing of innocent people. The government, military establishment and secret agencies in Pakistan are working overtime to destabilize peace and tranquility in Kashmir which is disservice to Kashmir youth as they have every right to acquire higher education participate in nation building and become proud citizens of India.

AIUMB president further said that the unfinished agenda in Kashmir is to get the Pakistan Occupied Kashmir (POK) vacated from Pakistani military and government of India must pursue this part in all global forums including UN.

In meetings held today in almost all the branches of AIUMB including Head Office in New Delhi, the participants expressed anguish over the disturbances in valley since 8th July after death of a dreaded terrorist Burhan Wani of Terror outfit Hizbul Mujahedffn who was glorified  by Nawaz Sharif the Pakistani Prime Minster ignoring all the sensitivity of India.

The participants were clear in their assertion that Pakistan is destabilizing Kashmir only to divert attention of the Pakistani people who are fed with Nawaz Sharif for his bad governance or no governance.  The situation of Baluchistan, POK, Northern areas also came up for discussion with special reference to Brahabdagh Khan Bugti ,exiled son of assassinated Bloch iron man Nawab Akbar Bugti ,because Junior Bugti has prayed for political asylum in India. Atrocities on Pakistani people by Nawaz Sharif regime has created peoples unrest and so Pakistani establishment has started death and destruction in Kashmir with a strong hope of easing out local pressure.

AIUMB units all over India pledged their support to the actions to be taken by Government of India and demanded that harsh steps are taken to force Pakistan from trouble mongering in the peaceful localities, Ceasefire violations on control line and terror attacks on military establishment like Uri. 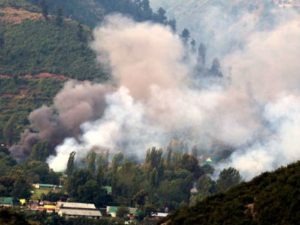 Why Sunnis are disassociating themselves from Salafists

The world’s premier pan-Arab daily newspaper, Asharq Al-Awsat, reported that an international Islamic conference was organised in Grozny, a city in Chechnya with more than 100 top Muslim clerics from all around the world. The agenda was to take an uncompromising stand against the growing Takfiri terrorism that is playing havoc across the world.

The globally renowned Sunni Islamic scholars and clergy unanimously took a stand that the Takfiri terrorists, who loudly claim to belong to ‘Sunni’ Islam, are not from among the Ahlus Sunnah (the Islamic terminology for the mainstream Sunni Muslims in the world).

Addressing the conference, leading Sufi Sunni scholar and the current Grand Imam of al-Azhar, Sheikh Ahmad al-Tayeb, defined what is meant by ‘Ahlus Sunnah‘ or Sunnism.

He stated: “Ahluls Sunna wal Jama’ah are the Ash’arites or Muturidis (adherents of Abu Mansur al-Maturidi’s systematic theology which is also identical to Imam Abu Hasan al-Ash’ari’s school of logical thought). In matters of belief, they are followers of any of the four schools of thought (Hanafi, Shaf’ai, Maliki or Hanbali) and are also the followers of pure Sufism in doctrines, manners and [spiritual] purification.”

This statement goes in Arabic as follows:

Having said that, Sheikh Ahmad al-Tayeb allegedly excluded the “Salafists” from the term of Ahluls Sunna (Sunnis) stating that Salafists –also known as Wahhabis – are not from among the Sunnis.

This was, probably the first time that the global Sunni Islamic scholars have disassociated themselves so clearly from the Salafists, who also claim to be the Ahluls Sunna or ‘Sunnis’.

Though this report has not received the media attention it deserved, it should be caught up as one of the most underlying news emanating from the Muslim world.

Over 100 Islamic clerics from around the world, including India, have attended this anti-Takfirism Sunni conference in Chechnya. They concluded that Salafism/Wahhabism, the state religion of the Saudi Kingdom flourishing in almost all Muslim-populated courtiers because of the massive Saudi funding, is not the part of mainstream Sunni Islam.

Given the significance of this epoch-making conference, the participating religious leaders called the conference a “significant turning point to correct the treacherous and lethal deviation from the true definition of Ahlus Sunna, as a result of the extremists’ attempts to hijack this glorious epithet, misusing it for themselves.” Senior scientists during the international Islamic conference in Chechnya. Twitter/@shkaboobacker

Scores of Islamic leaders and clerics from various countries like Egypt, India, Russia, Syria, Turkey, Britain, Lebanon, Jordan and the South African countries, who attended this global Sunni conference, echoed in unison and spoke out against the Takfiri terror. They took a resolution to ‘awaken the world about the real terror outfits which are ‘using the name of religion for personal geopolitical agendas’.

Shaikh Muhammad Saad al-Azhari, a moderate Egyptian Islamic scholar and professor at the al-Azhar University, who is the religious affairs consultant for the Egyptian president, also participated in this conference. He is widely known in the Arab world for his scholarly refutation of the extremist jihadist theology of IS, as eloquently done in his Arabic book entitled, Al Haqq al-Mubeen fi al-Radd ala Man Tala’aba bil Deen. In this book, he has come up with original and fresh ideas attempting to rebut the theology of modern jihadism and political Islamism.

He masterly critiqued Sayyid Qutub, the chief political islamist ideologue and his commentary on the Quran Fi Dilal al-Quran (In the shade of the Quran). The theocratic interpretations on this commentary have twisted Islamic doctrines to fan the fire of Takfirist terrorism.

Remarkably, a considerable number of Indian Sunni Islamic scholars were also seen in this anti-extremism Islamic conclave. For instance, South Indian Sufi Sunni leader, Sheikh Abu Bakr Ahmad, who runs the largest Islamic seminary in Kerala – Jamia Markaz Saqafa Sunniya, and Shaikh Anwar Ahmad al-Baghdadi who teaches at a leading North Indian madrasa Jamia Alimia in UP were there to articulate an Islamic narrative of peace and counter-terror.

The mainstream Indian Sunni scholars have recently begun to refute the literature that has been compiled and disseminated in the country with a view to indoctrinating the radical Wahhabi ideology among Indian Muslim masses, particularly in Kashmir.

In India, the Wahhabi version of Islam, underpinned by Ibn Taimiya’s Minhaj al-Sunnah and Ibn Abdul Wahhab’s Kitab al-Tawheed, still has to be confronted in a consistent and coherent way.  It took roots in the country when the earliest Salfism-inspired Indian clerics like Syed Ahmad ‘Shaheed’ Rai Barelwi and Maulana Ismail Dehlawi wrote books such as Taqweatul Imaan (strengthening the Islamic faith) and Sirat-e-Mustaqeem (the straight path). In these books, the term ‘jihad’ which actually elucidates an inner struggle to attain salvation was misconstrued, for the first time in India, as the strait path to the rebellion, separatism and wanton killing of the ‘infidels’.

Since the leading Islamic scholars of al-Azhar University have excluded the Salafists from the true adherents of Sunni Islam, it has inevitably caused an uproar among the Saudi Salafist clergy. Agitated reactions continue within the Salafist clerical circle in Saudi Arabia in a bid to oppose the Sunni conference hosted by the Chechen capital, Grozny.

In its report on the issue, the Arabic-language daily Ray al-Youm has told that that the Sunni conference has created a storm of anger among pro-government clerics in Saudi Arabia.

According to the report, several Saudi clerics accuse the Sunni-oriented conference of being an attempt by the Russian government to deepen the gap between Saudi Arabia and Egypt.

“It is not prudent to ignite crises and trigger misadventures of political nature, as well as intellectual affiliations and sloganeering, to demonize the Muslims and thereby widening divisions,” the council said in a statement carried by the official Saudi Press Agency.

Notably, the Sunni leaders of the Chechnya conference have recommended the establishment of a national television channel, at the level of Russia, whose objective would be to “communicate the true image of Islam.”

It is interesting to note that the same Islamist discourse is playing out in India too. It is this very Salafist concern that several Islamist leaders in India expressed when the World Sufi Forum was held in New Delhi. They painted it as the Indian government’s effort to frame Sufism as a force opposing Wahhabism/Salafism, though India has averred to combat the religious extremism per se. However, the World Sufi Forum’s participants seemed more enthusiastic about promoting Sufism as a way of supporting inclusive democracy and pluralism rather than Muslim sectarianism.

As an earlier article on Firstpost noted that Sufis have come all out of their conclaves and hospices to fight back the evils of ideological extremism stemming from the hardcore philosophies in the name of Islam. But the anti-Sufism elements and new movements of extremism in the Indian Muslim society are misleading the nation. They disparage every anti-extremism Sufi practitioner as “pseudo-Sufi”.