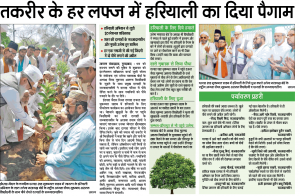 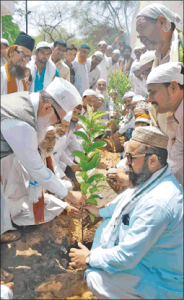 However, the Sufi divines would do a great help to Indian Muslims if they do not merely reiterate “reformist Sufism” in the name of revival of Sufism. They need to support the non-conformist form of Sufism which is in full accordance with the universal prophetic traditions and in complete synergy with the spiritual and saintly righteous Muslims. We never endorse ignorance or illiteracy in the name of Sufism. Anything in the name of Sufism that doesn’t reflect itself in accordance with the Quran and Sunnah is null and void. Therefore, along with the revivalist Sufism, we strive to stress the need for the reformist Sufism.Going by history, this is an eternal fact that Islam in India owes much of its existence to Sufi Mashaikh, Saints and Dervishes. In the 13th century, Khwaja Ghareeb Nawaz came to India and his arrival in India is regarded a great milestone in the path of love, equality, spirituality and peaceful Dawah work.

Hazrat Khwaja Ghareeb Nawaz (r.a) pioneered the composite culture in India which still remains well-spirited, widely accepted and appreciated by the majority of Indian people. After Khwaja Ghareeb Nawaz, Khwaja Qutbuddin Bhaktiyar Kaki, Baba Farid, Khwaja Nizamuddin Auliya, Makhdum Sayed Ashraf Jahangir Simnani and Ameer Khusro took this cause of eternal salvation ahead. They devotedly taught and promoted unconditional love, peace and all-embracing spirituality. Mere the reality that the shrines of these saints are still captivating people from all faith traditions, even after 800 years is self-explanatory that Sufism is a vital help in the current situation of hatred and malice.

In the backdrop of this, modern Sufis have come all out of their conclaves and hospices. They are declaring that the evils of ideological terrorism and extremism, materialism and opportunism can only be wiped out from the society through the restoration of Sufism, propagation of its peaceful massages, humane nature helping in the cessation of extremist thoughts and hardcore philosophies.

On the other hand, many anti-Sufism movements reared their head in the Muslim societies in the 19th century. They began to disparage Sufis as pseudo-Islamic spiritual masters. Though pacifist by nature, some well-spirited and energetic Sufis retorted this accusation calling it a tide of ideological extremism deep-rooted in the Muslim history. They link it with the ideology of Kharjism which basically emerged in the caliphate of Hazrat Ali (r.a), and was propagated among the Muslim fringes on the pretext of Qur’an and hadith, Prophetic sayings. In this beginning, Sufi divines remained confined to their shrines. As a result, particular Islamsit factions started adopting extremism, hatred, takfirism and wanton killing. This is, they view, is something that has brought the wider Muslim world and Middle East in particular to a grim and gory situation.

World Sufi Forum is going to begin in New Delhi at 7 pm on Thursday and Prime Minister Narendra Modi is scheduled to begin his speech at around 7.30 pm